The short story behind this project: For about a year now I have wanted to do a movie style photo shoot. My background is in independent & documentary film and I have always been heavily influenced by Hollywood films. I chose the Mirror’s Edge because aside from it being a fantastic video game with an iconic character, it was a plausible world to recreate for the camera.

I had brainstormed this project with a fellow Photographer A.J. Pomales for several months. We gathered shot ideas on the Internet based on the video game itself, screen shots and concept art for Mirror’s Edge. We discovered we were not the first to try this: pixelatedgirl.com/2009/02/mirrors-edge-photoshoot-part-2/ had already done this twice (and quite well) but it didn’t discourage us as much as give us some new ideas and inspiration. We were going to try this with our own twist and try some action shots as well.

Faith was played by Yen Ryder a professional model hairstylist who had recently worked with a friend on another photography project. My friend called me and said she had found the perfect person to play the character. Yen was fantastic to work with as a model and I really felt brought the Faith character to life. 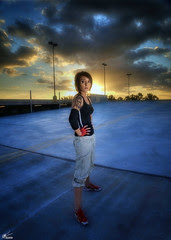 Kyle Vest from Universal Studios who is known locally for his exceptional makeup and body painting skills transformed Yen into Faith over four hours. He removed several real tattoos, added the runner tattoo and even painted the red glove on since we were unable to find and exact match.

The S.W.A.T. team outfit was created by Jennie Gritton and many parts were authentic police equipment. Kyle Vest and I each wore this costume to put together some of the bigger group shots (coming soon). For those shots we shot the background and characters separately as elements for a larger composited image in the end.

The weapons were replicas and did make us a bit nervous during the shoot because we were concerned some random person might see them and call the real S.W.A.T. on us even though we shot this at a private location and security knew what we were doing.

This project was done simply to see if it could be done, to challenge all those involved artistically and help me explore some new realms in photography and post processing.

The project gained international attention on several video game forums as well as a feature in a UK Playstation magazine. On Flickr the images racked up a whopping 407,00 views in about four months. In my widest dreams I never thought this project would go so far.

Some of the articles about the project:

Also Check out A.J.'s photostream for the making of "Photographs from The Mirror's Edge"