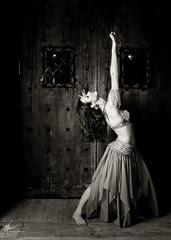 I thought I would take a moment and talk about one of the other subjects I often photograph, Belly Dancers. I have been photographing dancers for a couple years now. It came about by chance actually I was brought in to temporarily fill in for a resident Belly Dance photographer who was transitioning into motherhood. I had at that time zero experience with dancers but was more than willing to diversify my skill set. As I stepped into that world I found something so beautiful and that is the sisterhood that brings all these talented women together from all over the world. The western world often has a very superficial view of what a beautiful woman is but these dancers know that true beauty comes from diversity, creativity, artistry, friendship, love and confidence in who you are. 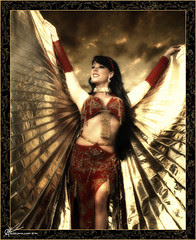 To understand the culture I must make note of the head instructor Suspira. Suspira has been a professional dancer all of her adult life. With the help of her husband Mohammed, she founded Orlando Bellydance in Winter Park, Florida. Unlike any other professional dance studio I know of, her doors are open to all women. Her students are perhaps the most diverse I have ever met: nearly every age, every size, ethnicity and background. She charges a very modest amount for classes, and she is there everyday giving all these women tremendous self-confidence and strength though the art form of dance.

She gives each dancer the opportunity to perform in large-scale dance venues for the public (that quite often sell out). Her dance studio also performs at many events for charity such as the American Cancer Society and the Special Olympics.

This woman, her vision and compassion, are extraordinary. The world needs more people like this. 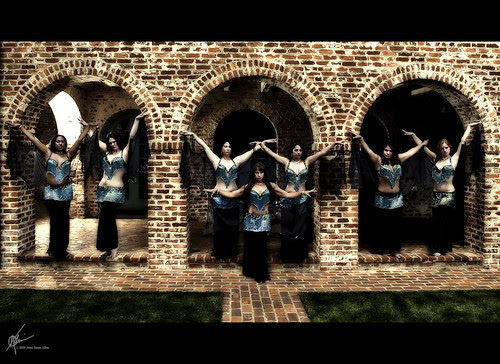 To capture the personality of a Belly Dancer you must first step away from the camera and go see a few performances. Each dancer has their own style, and each group of dancers have their own collective style, much like a tribe. It is only by examining the artistry of their dance that one can pull together the ideas on how to bring out the best visual representation for each group or dancer. 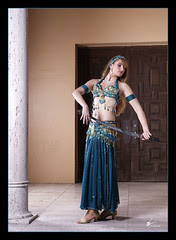 Either in the studio or on location the most critical element to capture a dancer is the ability to capture movement. As a photographer you have two choices: High ISO’s or Strobes to ensure you can capture that perfect moment in the motion. Posing works ok but you will never witness the energy of a dancer while they stand still. I recommend having music on hand. 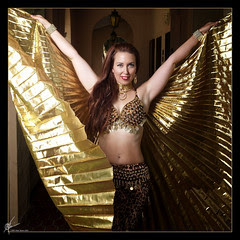 The other trick to Belly Dancers is their exotic clothing that is often covered in bright colors and shiny beads or medallions. Over saturating the colors can really kill the detail of the costume so there is always a fine balance in post process.

Lighting is one of the very best ways to bring out the personality of the dancer. Someone who is a bright and cheerful dancer could be lit from a higher perspective with diffused light. A dancer that has a dark style could be dramatically lit from the side or lower without as much diffusion to create theatrical contrast and shadows. 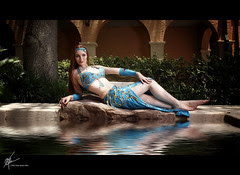 I find it helpful to talk with each dancer about what they hope to see in their final image. I try not to over direct since when a Belly Dancer is in her element pure magic can happen in front of the lens. It’s totally different than working with models; the photographer does not influence the shot as much as the dancer. 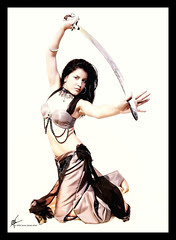 Now that I have been doing this a few years I can say the Belly Dance shoots are some of the most creative and fun. You never know what will happen when they dance; the colors and movement always come together with the light into something so incredibly artistic I often find myself saying “Wow, Look at this!” when the shot comes up for review. 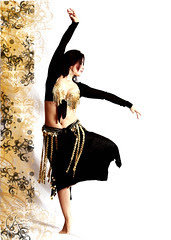 The lighting set ups for these shots:

1* I think this is my best black and white photograph. “Heart & Soul” was shot with a single mono-light at full power through a white umbrella. The mono-light was about 6ft up on the left side just 4ft away from the dancer's shoulder. This was shot next to an external doorway and sunlight bouncing off of white marble provided the subtle fill. The motion was danced not posed.

2* No flash was used on “Wings of Isis”. This was shot in the morning on a pretty clear day. The reflection off the wings created the gold light needed to light Suspira on this shot. The sky was replaced in post with a sky from a different photo.

3* Serpentina was lit primarily from the sun in the late morning. A wireless strobe fired at full power in the hallway behind the dancers to separate them from the shadows under the arches. A 12mm Lens was used to get the wide look.

4* “Zana” was lit at night by two full power mono-lights. The first light was set up at about 5ft high on the left side of the photo just behind the white pillar. The light was reflected in a silver umbrella to create even dispersion.

The second strobe was set up at about 7ft on a landing near the right side of the photo and was aimed in a more direct line to the dancer. The result was an image that had didn’t have any real harsh shadows as the two lights provided a more naturalistic balance.

5* “Jessica” was created with a single Mono-light shooting through a white umbrella at about 1/200th of a second on the left side of the photo about 3ft from the camera. Jessica created the pose by rotating the wings up and back.

6* “Nahema” - The lighting was done with a full power bare studio strobe shooting through narrow metal barn door (vertical shield) about 6ft up on the right side. A secondary strobe at 1/16th power through an umbrella (right side) gave a hint of the surrounding costume. I would like to say there was some great technical formula for a shot like this but sometimes magic just happens.

7* “Arielle” - The only real daylight in this is in the background but had some ambient light coming through the trees. I used a bare mono-light strobe on a stand on the far right side above her to get the main effect. I used a wireless Alien Bee's transmitter to fire the strobe. The water and reflection was completely computer generated.

8* “Kendy”
- A Vivitar 285HV was on a stand to the left of the camera, shooting through a white umbrella that was my primary flash.
- On the opposite side of the camera was a Lowell pro video light. (Fill light)
- In the back I had the SLS -006S slave flash attached to a stand near the ceiling bouncing light off a reflector as a hair light.
- A SLS-015S slave flash was placed behind the backdrop
- Another Lowell pro light was on a stand just to the rear left side aimed at the backdrop as a standard back light.
- The 285HV was triggered via sync cable, Slaves were light triggered.
This photo was then processed with an effect called “Bleach Bypass”

9* “True Grace” – The dancer was illuminated by two stacked mono-lights in the right side (2ft & 5ft heights) and one additional strobe dedicated to the backdrop on the left side. All strobes were firing full power off reflecting umbrellas.

The art on the left side was done in post using various pattern brush tips. The colors in the patterns were sampled from the dancers costume for each layer to balance the color composition.