Those following my Flickr photo stream have likely spotted a very unique set of starry sky shots. These shots are part of a much bigger project I have been working on for months now based on a photo journey I took across Utah’s scenic backcountry in June of 2010.

The first of these shots is called “Desert Night 1” the first successful result of many failed exposures trying to capture the night sky with my Canon 7D while my fellow photographer Jeff DeHaven captured great shots with his 5D MKII. The problem I was facing was I was trying to expose the night sky the way I would have traditionally photograph a city skyline; a long exposure with a low ISO to reduce noise. Starlight works differently, to make a long story short a much higher ISO in the ball park of iso 2500 for around 60 seconds was offering up constantly beautiful shots at a wide open aperture.

For the project I was using the Tokina ATX Pro 11-16mm F2.8; a choice lens for this type of imagery. Of course once I figured out the secret recipe for the starry sky shot I was completely hooked since I had wanted the ability to take images such as these for so long but never had the proper equipment (I have been out to Moab about six times, believe me I have tried.)

In the Shot called “Desert Night 3” I had the extra luck of having two trucks drive down the nearby highway as the shutter hung open thus capturing the light trails and the illumination of the massive canyon walls.

Just as I was getting the hang of that night photography stuff reality kicked in that my fellow photographer and I had been hiking all day and had not eaten. We retreated back to town for a late dinner and returned to the Arches National Park a few hours later for round two.

Of course the park was pitch black except for the starry sky, so seeing where we were going even with the bright lights on the car became an issue. Our first stop was a place called “Park Avenue” where we met up with another starlight photographer. I was using a Satachi TR-a to run the 7D in bulb mode and was getting some impressive results but I really wanted to get a shot through Turret Arch as I had seen in the Ron Fricke film “Baraka” so I talked the other two photographers to venture out in the dark to find this arch.

Sadly it was too dark to successfully navigate to the turret arch on a moonless night in the desert. So we drove lost into the darkness to the far side of the Arches park not having a clue we had passed our destination a long ways back. We were frustrated when we came to a dead end but as I stepped out of the car I noticed something in the sky that I hadn’t seen for many years…the Milky Way spread out in its glory before our eyes. Suddenly getting lost on some crazy back road became a blessing as our shutters aimed upward and open. Being a huge astronomy buff I was in heaven. The fun ended about 3am in the morning from plane exhaustion; we navigated the dark highway and returned to the soft lights of Moab not far away.

It would be a couple days before I got another chance to play under the stars but that day came in Zion National Park. That day was a total marathon photo day, Jeff and I had hiked all day shooting pictures on various canyon walls and the last stop was some natural pools in a cave system nearby. The sun went down on the hike back and we had to navigate the narrow rocky path with a flashlight. We had a beautiful view across the Zion Valley floor. There I snapped “Starlight over Zion 2” showing the Zion lodge as the only light source on the valley floor under a sea if stars; it was beautiful. 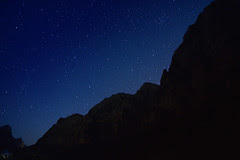 Shot six was done as we waited for the park tram to pick us up (last run of the night) and 7 and 8 were taken in the Zion visitor’s centers parking lot.

In post process I did shift the white balance to make the sky more blue rather than black for purely artistic reasons. I also did a high pass histogram pass on the stars to bring them out a tad more. The post process was done in Lightroom with some help from Nik’s Color Efex Pro.

There are many more Utah pictures in the cue, expect more stories from the great trip out west.