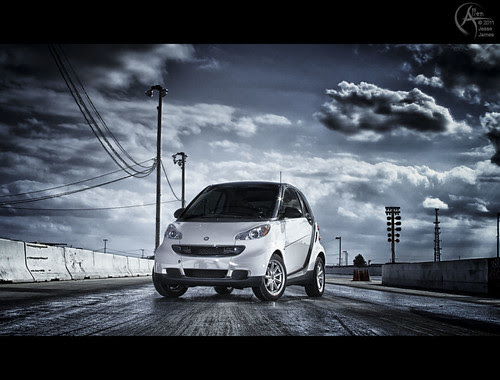 This month I was invited by the Organizer of "Central Florida smarts" to the 3rd annual smart car anniversary which is a celebration of the smart car being in the United States for 3 years. For the “smart” owners this was a fun filled two day event that included good food, fun drives, track events and a chance to meet face to face those that they chat with on the smart forum. 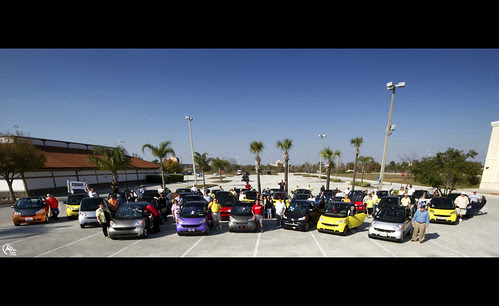 The group spawns from a meet up group located at: Meetup.com/smarties The group is packed full of die hard smart car fans who talk about driving, modifying and the basic joys of owning one of the most unique coupes in the world. The event was hosted by fellow photographer, smart car owner and Organizer to the Central FL smart car group Ivonne Bonett who worked with me on coving the world class Festival of Speed in Orlando two years ago. 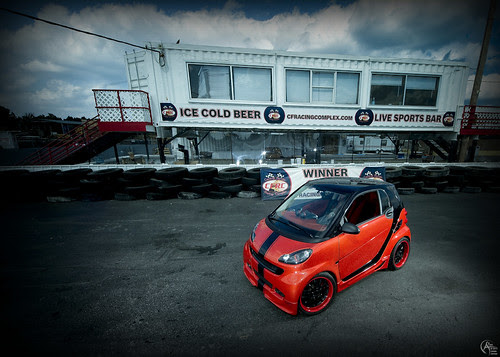 Photographing automobiles is something I am very use to but I have to say the smart is no ordinary automobile. The 106.1 inch mini car frames up vastly different than the normal exotics I shoot, even little ones such as the Lotus Exige seem pretty hefty compared to the smart for two coupe. 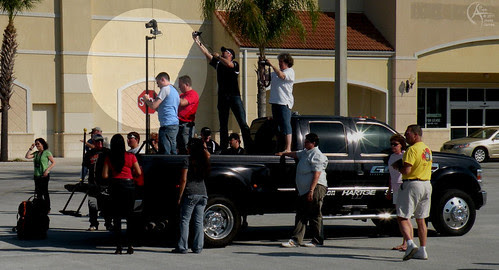 For the group shots I placed my CCS (Colossus camera stand) on the back of a truck and ran the 7D remotely with a robotic head with joystick remote, live view and my Satechi TR-A. I took a couple of traditional shots with my 8mm lens and then had the truck backed in closer for the overhead HDR Panorama that was stitched from 9 shots (3 across in triple bracket HDR) in Adobe Photoshop. The smarts were so small that the truck was only about 3ft away from the front bumper of the nearest smart in the shot. The Bescor Robotic head can be purchased here for $124
www.bhphotovideo.com/c/product/64399-REG/Bescor_MP101_MP_101_Motorized_Pan_Head.html 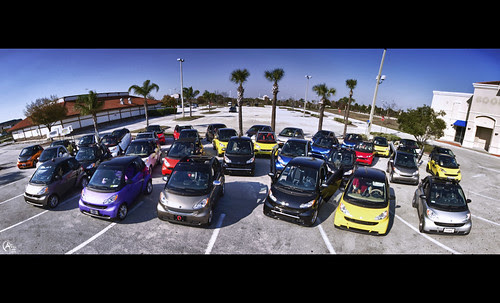 Day two was track day and I had the opportunity to use the drag race strip as a photo location for owners interested in my services while the other smarts auto crossed nearby. The staff at the Central Florida Racing Complex was very accommodating granting me access to their 1/8 mile drag strip. 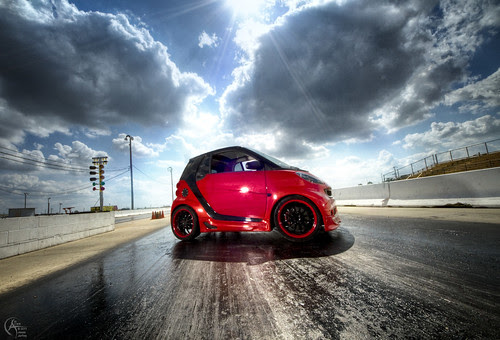 The track was covered in super tacky rubber that offered up a very cool surface for photos but was a lot like walking around on fly paper. I found after taking a shot I was literally stuck to the ground and often needed assistance to break free from the tracks grip. The lost shoes and ruined jeans were well worth it though as the shots came out very dramatic as I hoped. 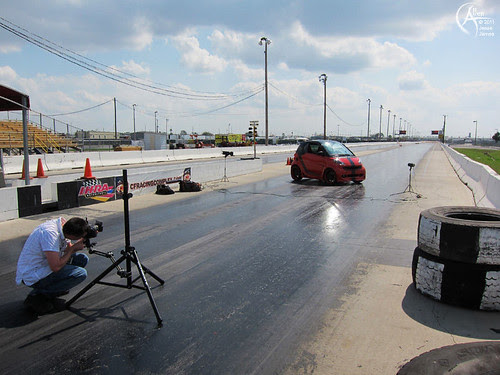 The majority of the shots were taken in the middle of the day so I had to contend with the bright sun often behind the smart car. To offset the harsh shadow I used an Alien Bee Vagabond II to power a set of studio strobes to kick away the shadows yet leave the light looking fairly natural. The strobes were triggered wirelessly using the Alien Bee cyber syncs that have a great range. 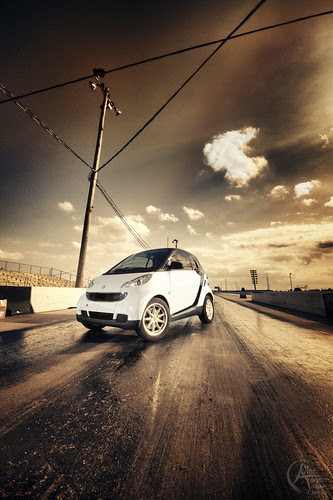 The post process was different for each of the shots depending on what type of effect I was after. I shot everything HDR ready meaning 3 shots about 2 brackets apart but not everything was processed as an HDR, some shots looked better with more subtle lighting. 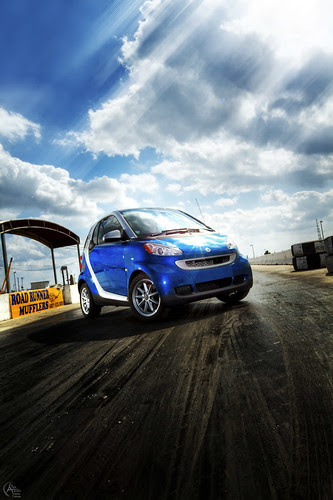 The shots that were processed as full HDR were done so with HDR Soft Photomatix and NIK’s HDR Efex Pro using Adobe light room as the host. Both programs offered up tons of creative options and I was quickly able to dial in a dramatic look. To finish the processing I often turned to NIK’s Viveza 2 to really fine tune the photo for contrast, lighting and color in specific areas; Photoshop was only really used to remove unwanted objects with its powerful content aware brush (a god send). 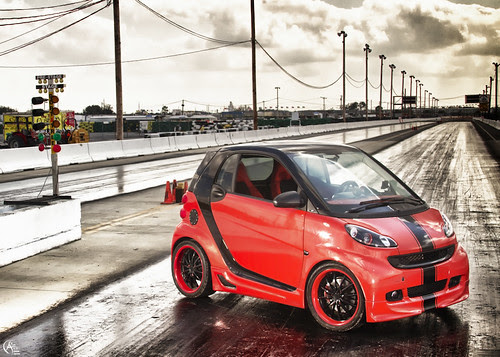 A couple tips for those of you interested in automotive photography. To help keep the subject car pronounced I often paid extra attention to the cars color. For instance on the blue car I emphasized the blue by enhancing the color contrast to make the car move vivid. On the bleach bypassed type shots I used white balance to bias the image toward the blue color. 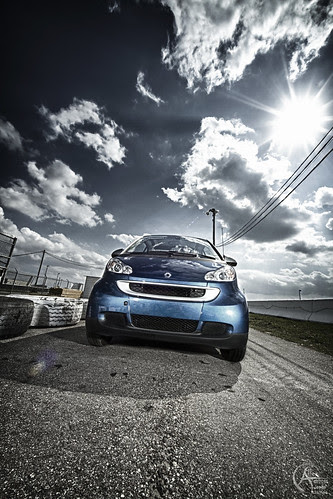 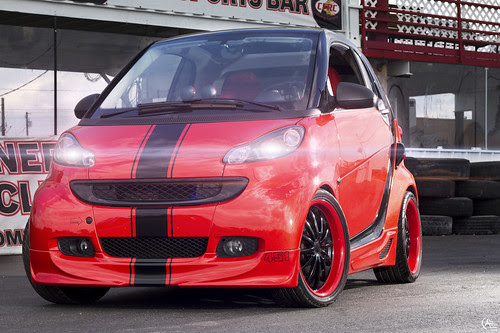 The white smart was de-saturated by brush in nearly every shot so the white color would be pure; this eliminated any color casts from the vehicles’ surface that could easily drift the color. At the end of post process I would once again white balance off the smart to make sure it was “white”. 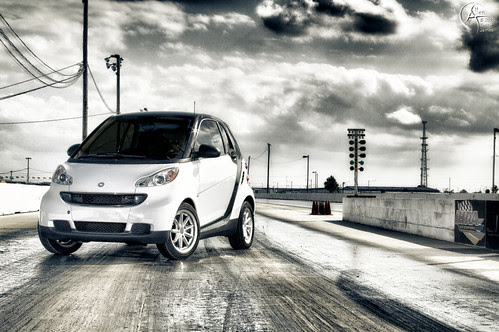 HDR Software I used on this project: