The three most enigmatic musical instruments

One of the great things about working as a sound designer is the conversations I get to have with other sound designers and composers. I find so often that I am always learning something new.

Today I am talking about something that has nothing to do with me other than my love for music and sound; I am going to share with you something that sound designer Dale Stump shared with me about three very special and yet very mysterious instruments. Two of the three I am going to bet you have heard before but would never know by seeing it and one of them is like no other instrument I have ever seen. 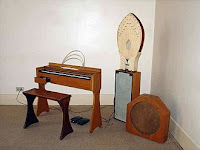 The first instrument is the Ondes Martenot; those of you familiar with the Theremin might quickly relate it to that as the sound is very similar. It was invented in 1928 by a Cellist and it shows. There is a great you tube video demonstrating this electronic instrument and at the end of the video the musician playing it will play a little melody that you most certainly will recognize but would have never guessed it was composed on a Ondes:
Click here to see the Ondes Video
More detailed reading on the Ondes Martenot can be found here: Wikipedia

Invented in 1761 by Ben Franklin the "Glass Harmonica" aka "Hydrocrystalphone" is a visually beautiful instrument with an even more beautiful sound. Though the Glass Harmonica sounds electronic it is not , the instrument spins on a cylinder rotated in very much the same way an old fashioned sewing machine works; the musician simply rubs damp fingers over the spinning crystal bowls to produce the sound and oh what a beautiful sound it is - take a listen ---> Glass Harmonic Video You will totally recognize this instruments sound.
More detailed reading on the Glass Harmonica can be found here on Wikipedia 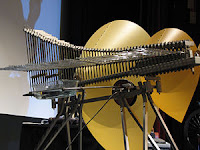 Ok now it's time for something a bit unworldly, I give you the Cristal Baschet created in 1952 by French brothers interested in making a sculpture you could play based off their instrument building skills to encourage kids to take an interest in music.
Similar to how the Glass Harmonica is played the musician glides their fingers over crystal cylinders that resonate through a block and three large cones that amplify the sound. This instrument makes some hauntingly complex tones and depending on what you use to manipulate the crystals (such as a soft mallet instead of your fingers) it can radically transform it's tonal range.
Take a listen to this amazing instrument here Cristal Baschet Video
More info on the Cristal Baschet here on Wikipedia
Cool stuff right? That's exactly what I said. Now if your like me and are asking "Alrighty where can I get my hands on these?" Well sadly they are very rare, though you never know what may show up on ebay. In the mean time there is a set of sample libraries by Sonic Couture you could pick up for NI Kontakt that may be the next best thing. Check out Sonic Couture
*Photos used in this post are creative commons from Wikipedia
Labels: Cristal Baschet Exotic Instruments Glass Harmonic Jesse James Allen Music for Video Games Ondes Martenot Savage Land Pictures Sound Design