As 2011 comes to a close I decided to reflect on some of my favorite shots and projects. This year the list is 20 wide but you’ll see why as this was a very diversified year for me as an artist.

(Click any picture to see it in a larger size) 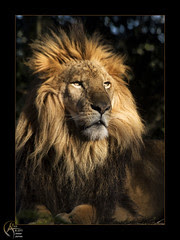 “Azlan” was shot at Busch Gardens Tampa Bay with a rented lens at the end of 2010. Every photographer goes to a zoo hoping for that magic when you can capture a moment with a rare creature that would be virtually impossible out in the wild. There is a lot of waiting for a shot like this, animals rarely pose for long so it’s all about being ready to hit the shutter.

The shot was tweaked to maximize the beautiful light across the main. Of course I thought of the story “The Lion The Witch and the Wardrobe” and that is how the shot got its name. 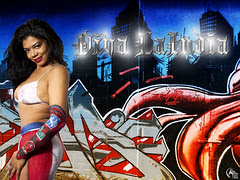 Diva LaIndia was starting up her you tube page and needed a proper background. I hired in Kyle Vest to do the wonderful body paint. After hours under the airbrush LaIndia emerged as a character with great Puerto Rican pride and some wonderful New York accents as well.

Image was done against a green screen and the wall behind her was composited. I was pleased with the metal texture I made for the lettering in her name as well. 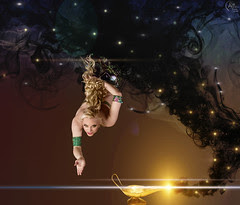 “Djinn Remix” started out as dancer Lori Katz stood up and arched over backwards to the camera for a bellydance portrait. The shot as taken really didn’t come off as we hoped but flipping it upside down and adding some black smoke like a “Genie in a bottle” It came to life. Lori’s husband liked the shot so much that he commissioned me to make a bigger/grader version of it. There must have been 30 layers of lens flares to get all the sparkles, not to mention all the painted in smoke effects. After all the layers were built a considerable amount of time was spent in re-coloring as the original shot was set against a neutral grey backdrop. 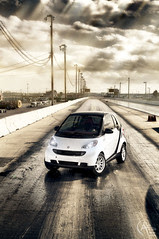 Bonnet Smart was shot at an Orlando drag racing track for a local Smart car club event. This was a tricky shot to get not so much in the set up but walking across the surface of the drag track literally stopped me in my tracks as the surface was like fly paper. A simple light change took nearly five minutes just to walk over and back. I used two studio strobes to light the car from each side.

In post I did an HDRI pass with some extra contrast. The shot was named after the owner Ivonne Bonnet who runs the local chapter of the Smart club 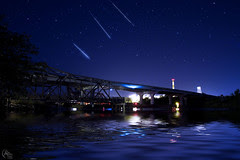 “Can we pretend that airplanes in the night sky are like shooting stars” was shot one evening on the St Johns river after I was returning home from Daytona Beach. I shot a series of photos that night in that area mostly because I was interested in the massive power plant nearby.

All the shots of the power plant came out pretty bad but this shot with the airplanes heading toward Daytona Airport more than made up for it. 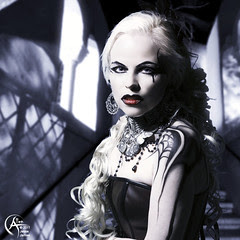 “The Deadstalkers Album Cover” was shot on a green screen for the band “Fast Fists”. Make up for Lori Katz was done by Kyle Vest in a ultra Goth type fashion.

The background was shot separately at Rollins Collage in Winter Park Florida but lit the same as the studio shoot for continuity,

Bringing the composite together was fairly straight forward and the rest was simply picking the best tonal look (done in Nik Color EFX Pro). The band was very pleased with the cover. 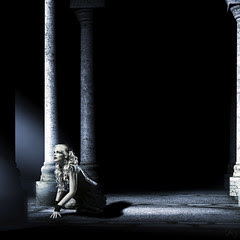 “In the Shadows” was a spin off shot from an album cover shoot I did for the St Petersburg band “Fast Fists” . The image was shot on a green screen and the set was created in DAZ 3d.

I created the shot because I have an interest in blending 3d environments with reality as they do so well in movies these days. I thought for a serious first attempt this turned out pretty realistic. 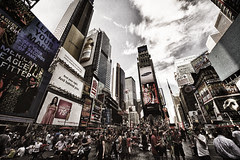 “Heart of America” was of course taken in Times Square New York. Though this exact spot has shown up in countless photographs the simple fact that I was actually standing in the most famous intersection in America made me snap the Cliché shot but add my own little twist to the post process. 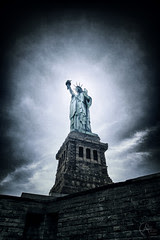 “Let Freedom Ring” is an HDRI image shot in the shadow of the Statute of Library. The sun was directly behind lady library to create the halo effect seen here. The HDRI processing only got me about halfway to this shot, I spent a considerable amount of time in the NIK program Viveza 2 to bring out all the detail and color hidden in the shadows. 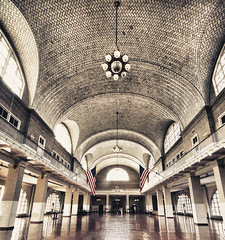 “Ellis Island” – You would never know from this shot that there were a ton of tourists there that day. My family and I just happened to walk into this hall when no one was there, I’m not sure why it was so empty but thinking quickly I used my backpack as a tripod and captured the moment.

In post I used HDRI processing on the triple bracketed image along with a little bleach bypass love to bring out all this detail in the bricks. 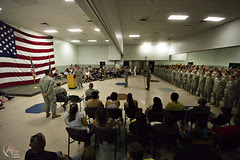 “Departure Ceremony” - Independence day weekend - American reserve troops stand in a departure ceremony saying goodbye to their friends and families before leaving for up to a year.

I volunteered my time to these troops and their families on this day to photograph each of them so they can remember each other on the far side of the world.
Regardless of your political beliefs this event was very humbling. These troops and their families willingly make a sacrifice the majority would never consider. I have a great respect to the American men and women who so bravely serve our country, we would not be here if they did not.
This was a 4th of July event I will never forget. 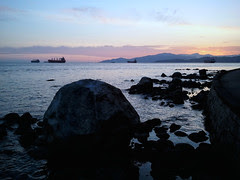 “Blue Monday” - While on a business trip to Vancouver I shot this image on a cell phone while strolling through the immensely beautiful “Stanley Park”. The image of ships in the harbor was just so tranquil I had to bring it to life as I saw it that day.

Through some color restoration in Viveza the shot was sculpted to be what I had hoped for. Though it was not shot on Monday it was named so because of the lyrics to the New Order song “Blue Monday” that say “I see a ship in the harbor, I can and shall obey but if it wasn’t for your misfortune I would be a heavenly person today” … whatever that means. 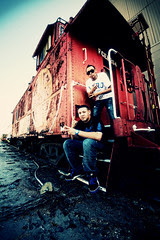 “Orl-y & Kel-e” - This image was taken for a couple of Reggaeton artists here in Orlando out in an abandoned railroad yard. The color processing on this really made this special , I was working with some new “Red Giant” software - “Magic Bullet” to achieve the effect. 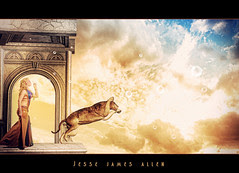 “Bubbles” - Lori again (my muse for this year) had hired me to do some bellydance photos for her, but at the end of the session I requested a couple extra shots to try out some more virtual reality sets. This shot modeled after the Michael Parks painting “Gargoyles “ was by far my favorite, though did not receive much attention online.

To create it I composited a shot of Lori on the green screen, a photo of a bubble blowing device and a sky photo taken on the parking garage where I work. The stone structure and big cat were created with Daz 3d. Color processing was done with Nik Color EFX Pro and Red Giant “Magic Bullet” 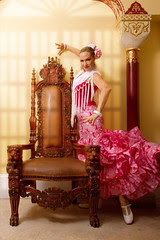 “Flamenco del Sol #8” - Tammy Millar poses for a shot to be used in the “Pasion Flamenca” performance program. The shot was taken in the lobby of the Casa Monica historic hotel in St. Augustine (about 12” from the reception desk)

I used three strobes for the shot to freeze the dress that was dropped by hand. 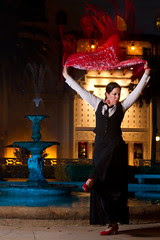 This shot used four monolights to add some color to the night. I used a blue gel for the strobe hitting the fountain.

I really love the movement in this shot. 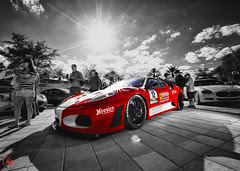 “Like my Status” was taken at the 2011 Orlando Festival of Speed. The Ferrari F430GT was parked in a very crowded spot but thanks to a wide lens and a low angle I was able to walk away with a sweet shot.

I lit the car with a 240 Watt studio strobe attached to a Alien Bee’s Vagabond tucked inside pilots case; it made a great mobile lighting setup. 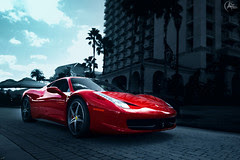 “4 5 8” was also shot at the Orlando Festival of Speed, ironically I was actually setting up to take a shot of a Ford GT when I saw the Ferrari making its way down the path. I quickly turned the camera and strobe light around waited for that perfect moment as the 458 entered my frame; the strobe froze the 458 in the image so most would never know it was a moving shot.

In post I did a selective desaturation and toning process. I also spent some time in Color Efx pro getting the Ferrari just the right shade of red. 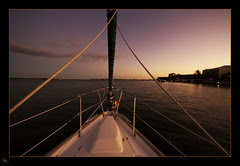 “Serenidad 10” was shot from the deck of the 41’ sail boat as we pulled into the docks in Marco Island Florida. The sunset created this beautiful golden tone that really summed up the romantic atmosphere that was with my girlfriend and I during our sail; simply a beautiful way to end a day. 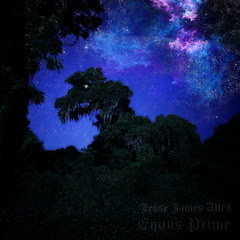 Equus Prime – Album cover
Inspired by the “Shadow of the Colossus” video game by ICO - I created this album cover image using fractals, star brushes and a photo of a “Colossus”
The image of the Colossus horse is in fact real, it was a group of trees in a local greenbelt that took on such a wonderful shape that I had to capture it. Though the shot was taken in daylight I transformed it into a night to fit the mood of this sci-fi type musical track.
Labels: "Jesse James Allen" Album Covers Automotive Photography Fast Fists Gothic New York City Reggaton smart car US Troops