It was a dream scenario for an automotive photographer: Two very exclusive, highly tuned exotic cars, two beautiful models, an isolated section of an airfield, a private hanger, a couple great assistants, the right gear and plenty of time. This was the outline for a recent shoot I did with a set of MEC Designed Mercedes-Benz SLS sports cars.

Both SLS's were the very first to undergo the visual aesthetic and performance tuning you see here. The roadster had just come out of the shop the day of the shoot, no one had ever even seen the modifications on this exotic before. 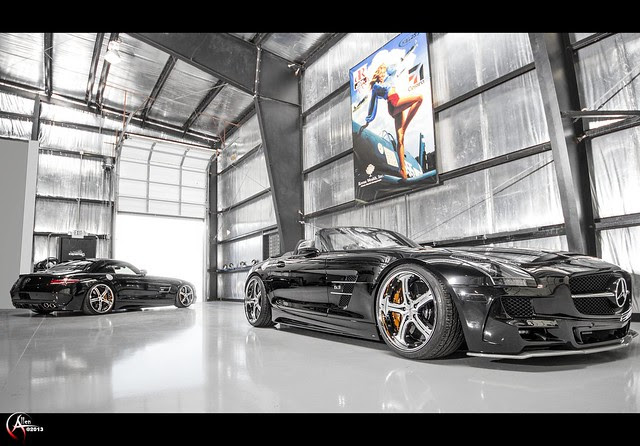 The MEC automotive photo-shoot was broken up into two parts, a night shoot with the models and a day shoot on the airfield.

The night shoot involved a considerable about of lighting in many cases four to five lights per scene. Due to the size of the hanger and two cars I was running around 2,600 watts of flash lighting.  Many configurations were spread out as seen below with two main lights firing into the diffuseres at a 45 degree angle on each side of the model with two lesser powered strobes in back providing separation. The entire system was run wireless from an Alien Bees Cybersync system. 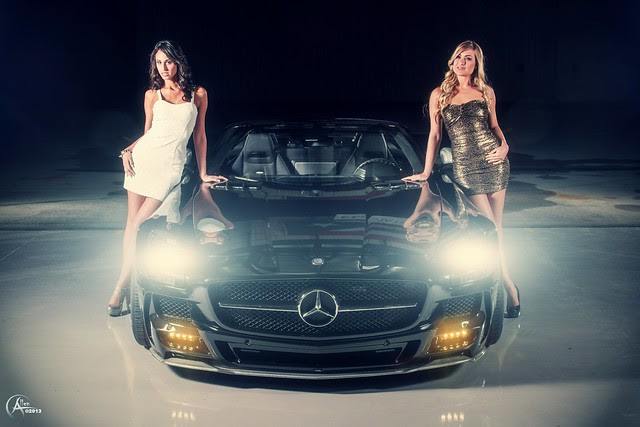 The interior of the hanger was covered with a highly reflective insulation sheet, that was both a good thing and a bad thing. The good was that light could be bounced off of it and that reduced the amount of lights that needed to be set up in some situations. The bad was that light would often bounce undesirably but after some tweaking I found that I was able to control it using honeycomb grids. 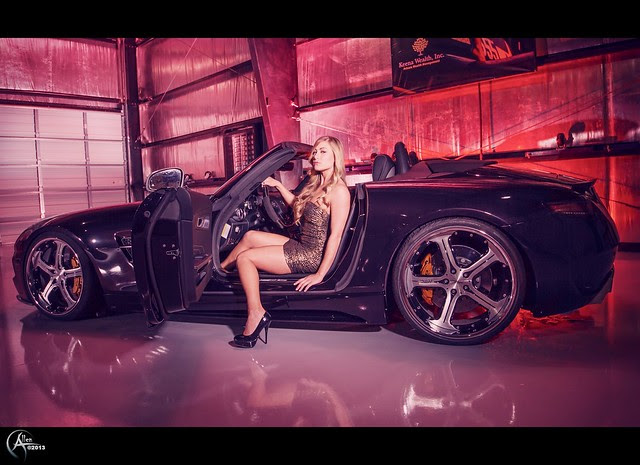 In several shots there is a blue or red background light, this was achieved by simply gelling the backdrop strobes and leaving the primary" key light" white. This was a trick I actually learned from my days photographing bellydancers . Any area of the backdrop that was not completely covered by the desired color could be matched and spread out in post. This was done by taking a sample of the desired color in an editor, selecting the "color overlay" mode on the brush tool (or layer) and hand painting it in to match perfectly with 30-75% Opacity. This can be done in both Adobe Photoshop or Corel Paint Shop easily. 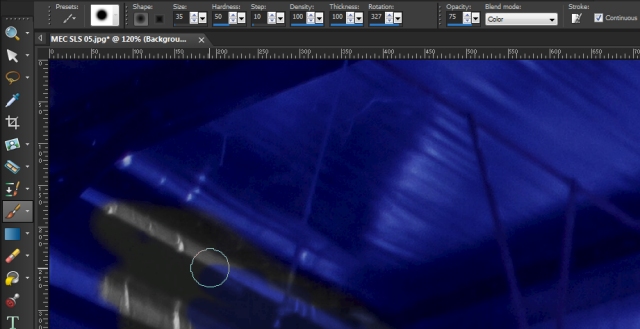 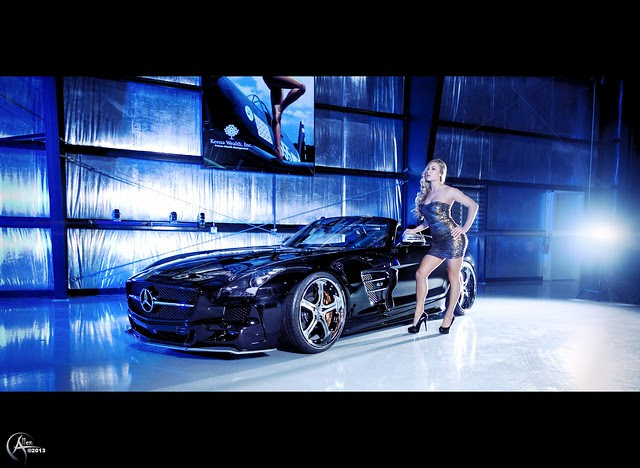 One unique challenge to an automotive shoot with models is the issue with the subject size difference. Typically in a portrait shoot one would use a 50 or 80MM lens to achieve a flattering look and a good background separation. With cars it's desirable to use wide angle lenses to achieve a larger than life, powerful feel. Since the shoot was primarily about the cars I opted in most cases to shoot wide but use light to bring focus the models Ednyr and Kelly. 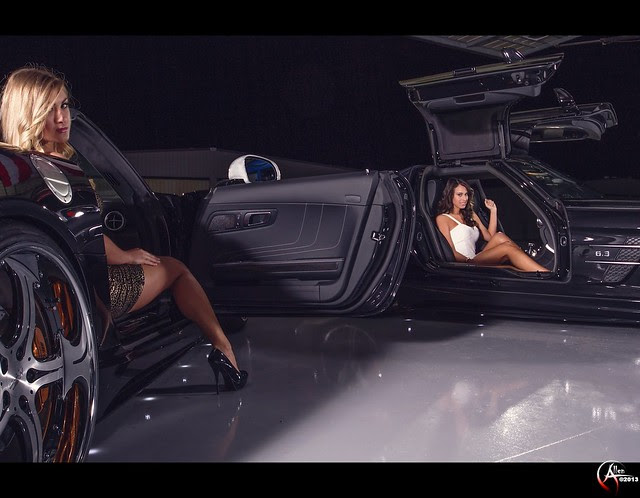 After the models left I did a series of car shots with long exposure and light-painting. The image below was a 37 second bulb exposure illuminated by an LED flashlight and some spill from a red exit sign. I have seen a number of automotive photographers on flickr that deal primarily with light painting. I think from a creative standpoint this is a very exciting way to work. 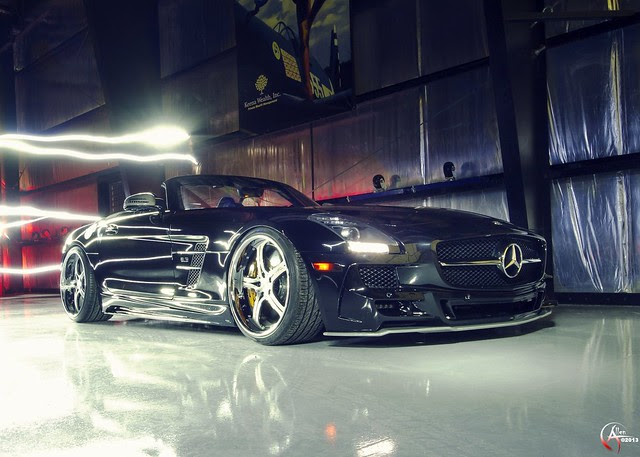 The daylight shoot was a different experience since the models were not involved so the shots were about the cars. During this part of the shoot I opted to shoot largely in 220 medium format film on my Mamiya. 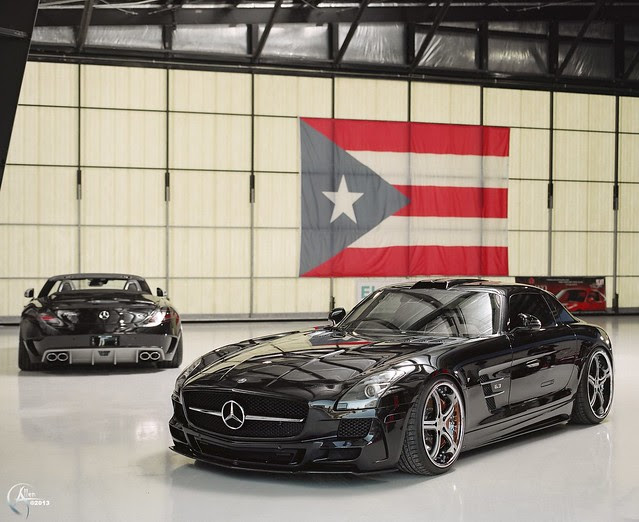 As stated in previous posts I have really been impressed with the dynamic range and color accuracy of medium format film. I shot on Kodak Portra 160 and was very pleased with the results. The negatives were scanned by a lab in high resolution from the negatives. However, comparing a Mamiya film camera to a Canon digital camera in a real world photo shoot gave me a new perspective; Both cameras offered up powerful images that were impressive for completely different reasons. 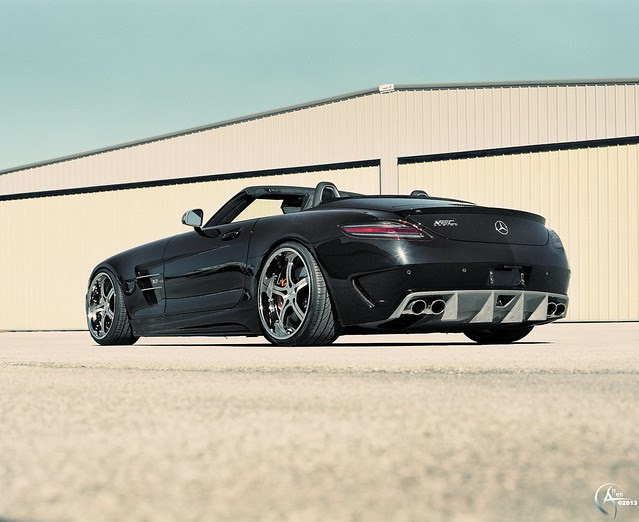 The Canon 7D offered up bold, dramatic edgy photos that felt more cinematic rather than photographic: 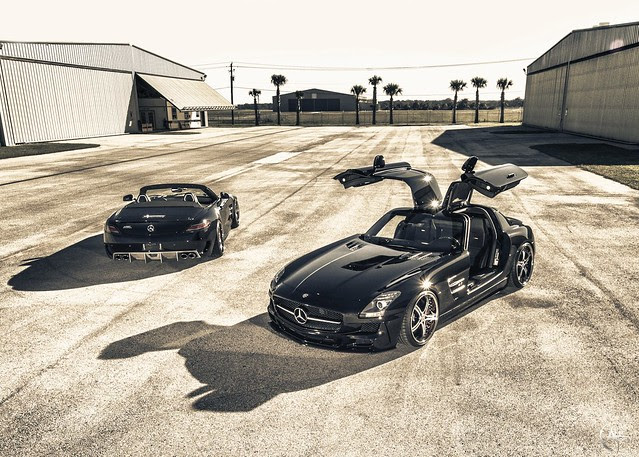 The end results blew the whole "film vs digital" discussion right out the window as now I was able to offer the client both and I wasn't restricted to a single style. I also discovered that being forced to accurately meter and set up the medium format shots also helped me take better shots when I turned to the digital camera as I was more aware of light and composition.

Shooting black cars in the daylight seems like it would be easier than night but the harsh sun could easily hide details in the shadows. Since I was often far away from a power outlet I used an Alien Bees Vagabond 2 to power two 900 watt mono-lights. This lighting array easily chase away unwanted shadows and was essential for shots where the client wanted to be in the shot with his cars. The only disadvantage of the set up was after an hour the Vagabond had largely depleted its power under the stress of 1,800 watts so shots had to be planned even more carefully. 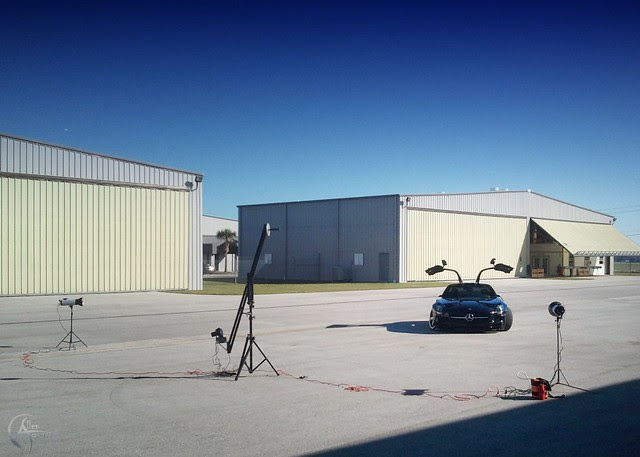 I used a Glidecam Camcrane Jib to both help shoot glossy video moves with the 7D and high perspective still shots. The Jib is a bit of a pain to set up and required two people to move it but it was worth it as the perspectives it offered up were fantastic. To see what was going on through the eye of the 7D I used the Gigtube remote video viewfinder; this device got a lot of criticism from consumers for the extra wires but its small size, long reach and shutter control ability's made it a joy in this scenario. 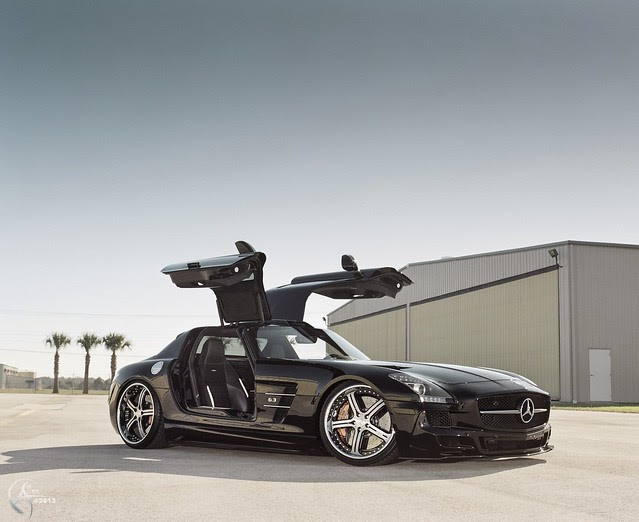 Post-production for this project was largely done in Adobe Lightroom 4. Color correction and modification was achieved with Lightroom, Nik Software's Viveza 2 and Red Giant's Photo Looks 2.0 all offered a wide variety of tools that worked very well and sometimes in combination for some of the more dramatic shots.

Most post aside from color was taking out undesirable spots or shadows. Local contrast and some gradient effects were put into place to add intensity to the shots.

Overall working with these two exotics was wonderful and being able to try out a full range of photography tricks was a blessing and learning experience. One thing I thought of after the shoot was a better way to deal with the need for a massive softbox often used in Cyclorama studio shoots, critical for smooth lighting across the lines of a car. The theory for an easy to set up would be to use a common portable backdrop rig (two stands and a crossbar) with a large white screen. Then all you would have to do is fire the high powered strobes into the backdrop as it is positioned 45 degrees from the side of the car; I'm willing to bet the results would be quite desirable.  That's the great thing about projects like this, it gets you thinking about how to take it to the next level.

Thanks for reading,
- Jesse