Who hasn't dreamed of driving a Supercar? One can only imagine how amazing it must feel to drive a car that is like nothing else on the road. It would be so cool to have all that power and that race car type handling. It would be so fun to turn heads and see peoples reactions as you drove by. Must be nice, but a dream non-the-less that only those who are very successful or privileged get to experience...however sometimes that once-in-a-lifetime dream-come-true happens to one of us average folks. Little did I know the morning of April 7th that that dream was about to come true for me. 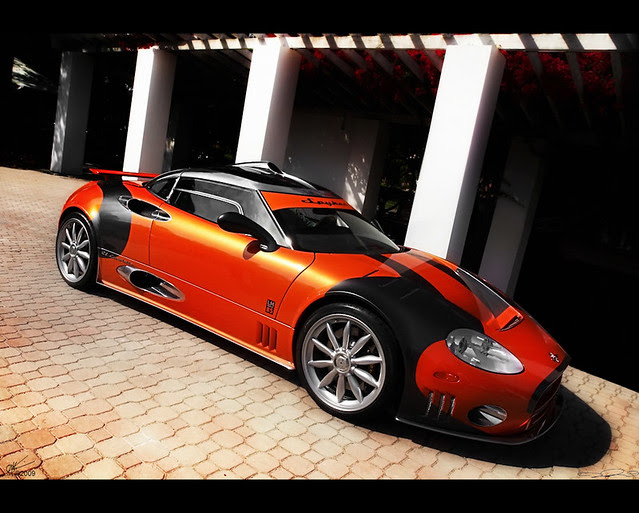 I was covering the St Petersburg Festival of Speed this past Sunday for the event organizer, shooting cars doing my thing. I have been covering the Festivals of Speed as an event photographer since 2007. 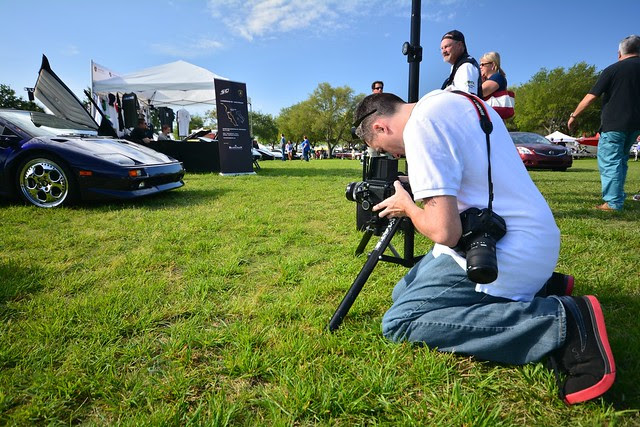 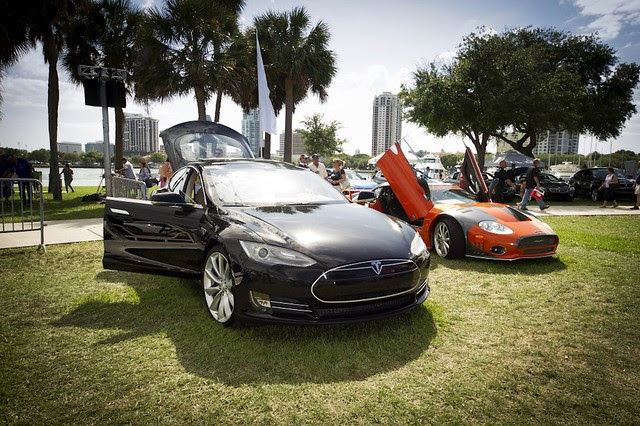 As I started to shoot the back side of the Spyker LM85 I feel this tap on my shoulder. The woman started asking me how well I liked the Spyker and being that I had shot it at the show many years in a row I said that the LM85 was truly a standout even among a sea of exotic cars.  It turned out she had bought it for her husband for their anniversary and had quite a tale about purchasing the vehicle and how great of a company Spyker was to deal with (Including flying the couple to France for a track day at Le Mans).  According to her there were only about 24 of these limited edition LM85’s were available to the public. 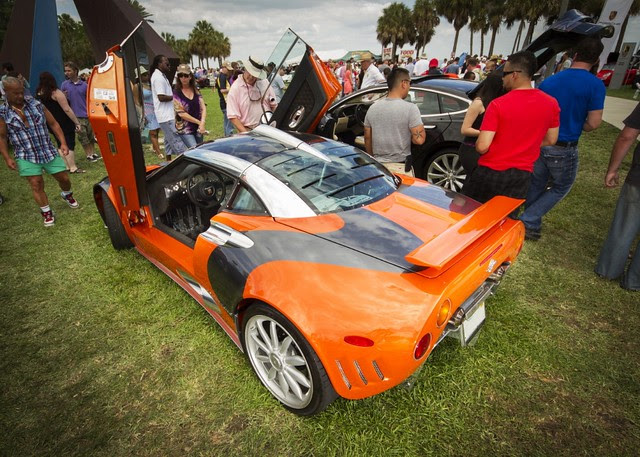 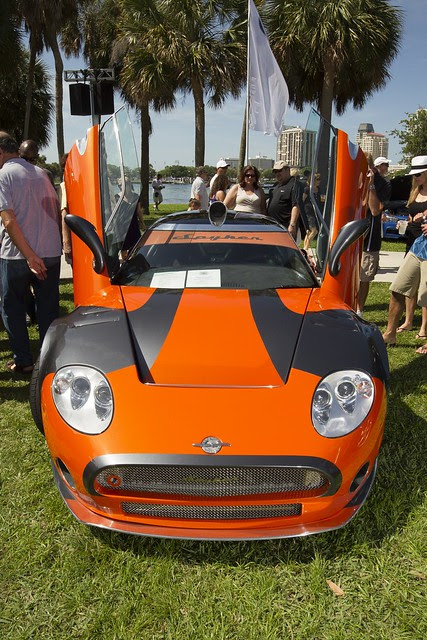 Her husband came over after about 15 minutes and started asking me questions about working as a photographer for the festival and I mentioned that I had liked the LM85 so much that I had a poster of it hanging in my home (The photo below) ; around that time the event organizer asked me to photograph the awards ceremony so I handed the couple my card and went to work. 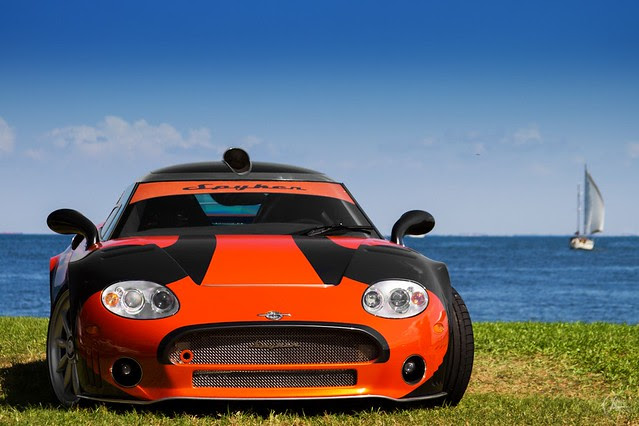 After the show ended I was heading back to my car when my cell phone rang. The voice said “Hey Jesse would you like to drive my car?” in which I replied “ummmm……I can’t say no to that, I’ll be there in 10 minutes”. A fellow photographer friend of mine helped me get my gear back to my new Honda that I drove to the show, then I made a B-line to the Spyker like a kid going to Disneyland for the first time. Once at the car the owner was chatting with some of the event official’s and then said “You ready to go?”Part of me thought I should just be a passenger because that is a lot of money (about a quarter million) followed by the thought “How often does this opportunity happen in one’s life?” so I simply said “absolutely” 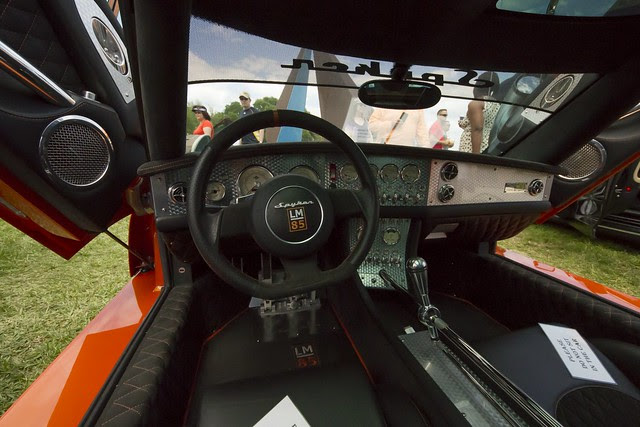 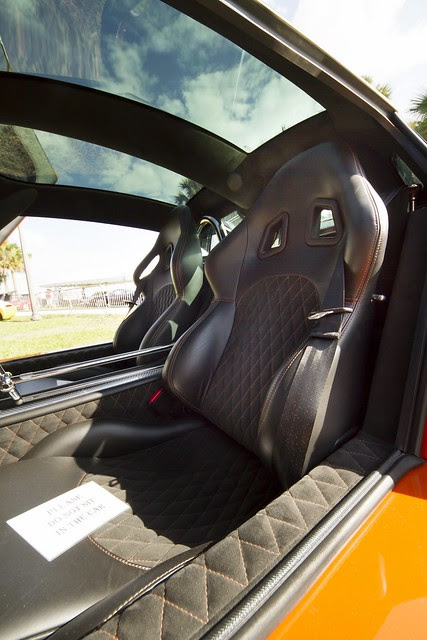 Crawling into the cockpit was certainly an awe moment, the interior is somewhere between a 40’s airplane and high fashion upholstery. I have shot a lot of Exotics through the years, the interior of the LM85 is unquestionably the most stunning.  I sat there for a second staring at the gauge cluster as my photographer friend came by and snapped some pics. My friend asked how did I feel and I stated “In a minute I’m positive my alarm clock is going to go off and I’m going to be pissed” My friend pitched my arm and stated this was no dream.  So I pulled down the vertical door. The owner presented a silver disc that allowed the car to be started. I flipped up the ignition switch on the dash and hit “engine start” it sounded amazing! Like a chorus of roaring tigers with a beautiful harmonic overtone. 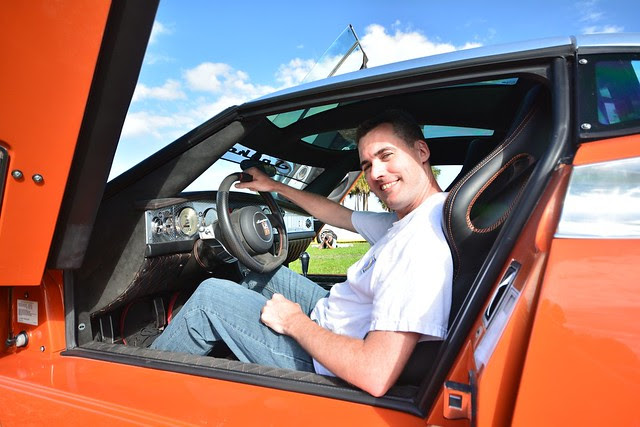 I put the linked shifter into first and crawled across Vinoy Park and out onto the street. Going through St Pete I could help but notice people looking and giving me the thumbs up. Honestly I was happy enough right there but the owner said “Well let’s take her out onto 375” 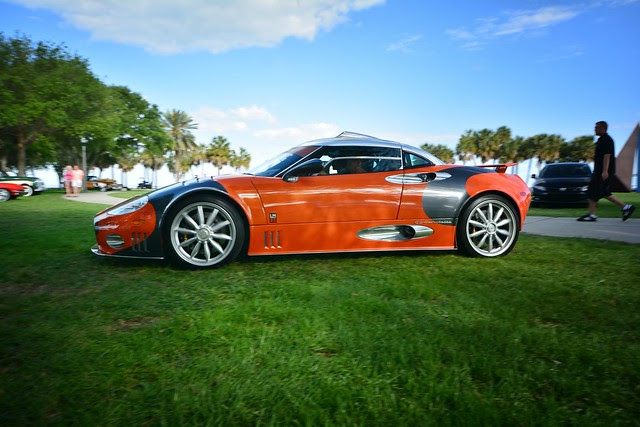 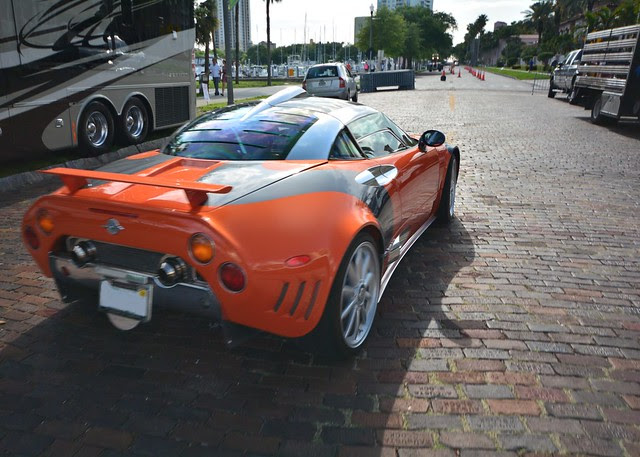 The on ramp to the highway was nearly a religious experience and the Spyker blasted to 60 in 3nd gear faster than I could say “Good lord!"  There were surprisingly few cars on the road and those that were there got out of the way. The owner stated most people do get out of the way because they want to see it.

The owner was showing me the best lines to take the first few curves of the road, the steering on the LM85 is damn near telepathic, it felt video game flawless. Quite honestly switching to video game mentality helped me focus on the driving experience more than the worry of liability….it was like the best game of Forza I would ever play.

Nearing the edge of St. Pete he had me get off the ramp and circle around.  There was an SUV full of college kids that were losing their mind next to us at the light.  The owner said “Here is your on ramp...you should see what this can do” as the light changed I hit the gas full throttle and oh …my…. god the sounds and sensation of speed was like nothing I had ever experienced on four wheels.  By the top of the ramp the speedo said 115.

On the way back to downtown it really started to hit me that this wasn't some dream. I was outside myself…seriously the biggest emotional high ever. The Spyker is not a car you drive it is something you experience and it is an experience that will leave you with a sense of humbleness and awe intertwined by intrigue and excitement  The LM85 is a masterpiece of visual design embraced by the pure essence of a world class track car.

Taking the Spyker down to 35 MPH was no sweat for the oversized breaks. The curb side shouts of enthusiasm as we passed the outdoor restaurant patios were so cool. 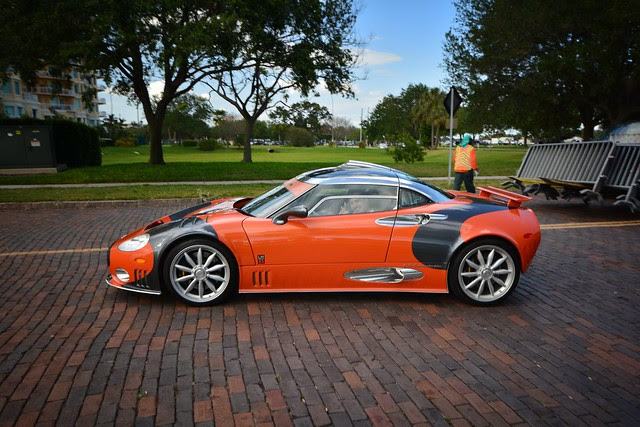 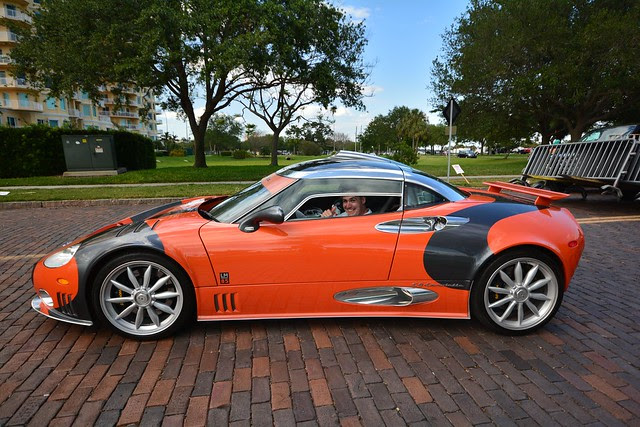 The owner asked if I had a good time and I said “I seriously can’t thank you enough, this was beyond words amazing”. As we pulled to a stop at the event security my photographer friend snapped the picture above, I had that smile all night long...I still do when I think about this. 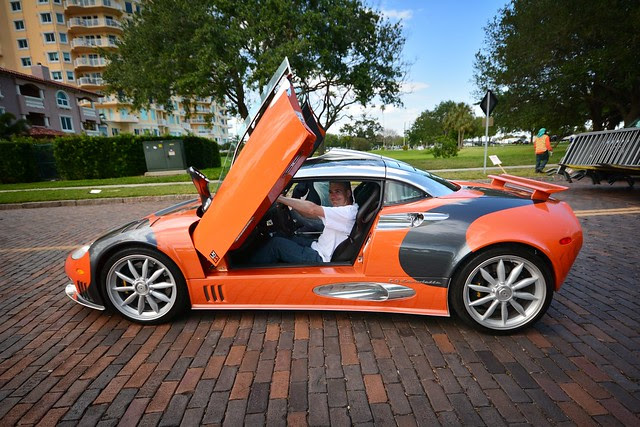 The owner said as cool as the Spyker is to drive it brings him the most happiness getting a chance to share an experience with a true automotive enthusiast. I shook his hand and stepped out from under the vertical door …that was quite possibly the best fifteen minutes I have ever had behind the wheel.

The moral of the story:
"I drove to an Exotic car show in a Honda and left driving a Spyker Supercar…never underestimate the potential of a single day of your life." 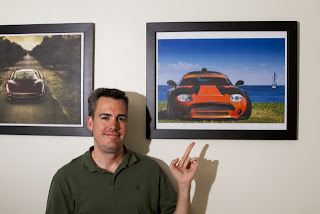 Special thanks to Jason Sha'ul  the photos of me used in this story.
Labels: Car driving Driving a Spyker LM85 story Supercar