Night of the Spider 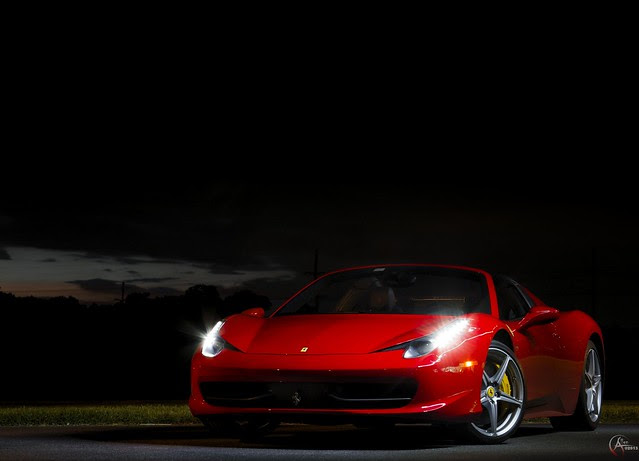 This story will start on an airplane traveling across the country; There I sat in my seat reading an absolutely fascinating book by fellow photographer Eric Curry . Eric is no ordinary photographer, he is a master of Light-painting and in his book Painting with Light: Lighting & Photoshop Techniques for Photographers he goes in depth on how a simple set of flashlights and a DSLR can be used to create some stunning imagery.

Though I had dabbled in Light-painting I had never tried his approach of stitching images together of different light passes, so by the time the landing gears dropped in San Francisco I knew my future would at some point involve an Exotic automobile and a flashlight.

Weeks later I was chatting with Flickr photographer Jason Sha'ul from "Trend Setter Developments"and explained some of the theory of Eric's book, Jason thought it sounded like a great challenge and worked though some contacts to find us the right automobile.

The right automobile just happened to be a Ferrari 458 Spider that Jason was able to obtain through a contact. The vehicle was delivered and I showed up with a small arsenal of lighting. Being that it is not everyday one gets a hold of a 2012 Ferrari at the location of their choice I was not taking any chances. I brought everything from LED lights to a 1000 watt strobe and powercell. The first shots were very standard, traditional dual strobe shots that would be common to any magazine: 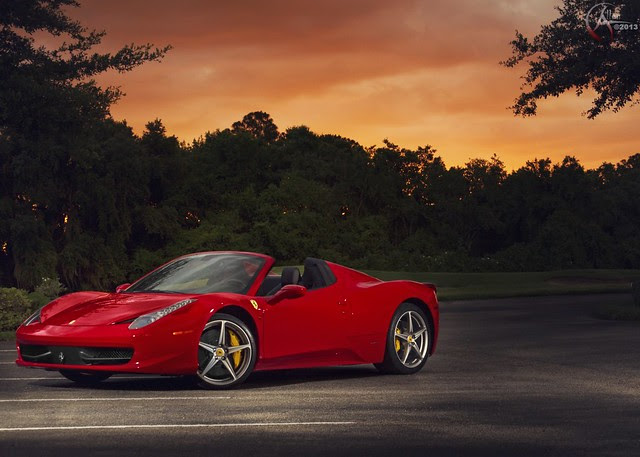 But as the sun set and the storm clouds crept along I simply put away the heavy artillery and brought out an LED lighting array on a monopod.  This simple setup actually kicked out a good amount of light and as I painted Jason fired the first shot: 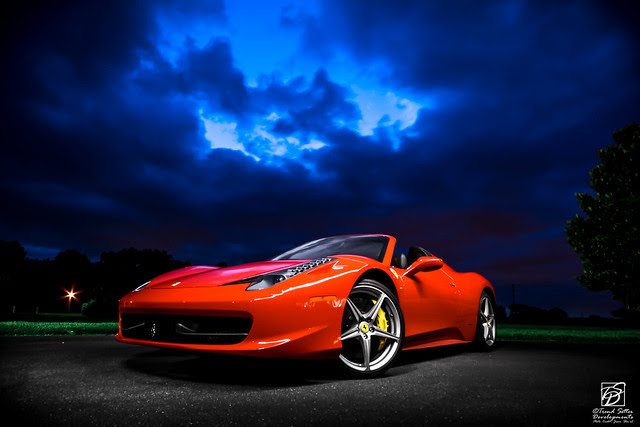 The image as you can see was quite impressive, so as they say "it was on like Donkey Kong" as we started to really explore the potential of light and long exposures. In the shot above I simply held up the light on a pole and walked clockwise around the car behind the camera with the light angled down, you can see the path in on the ground. 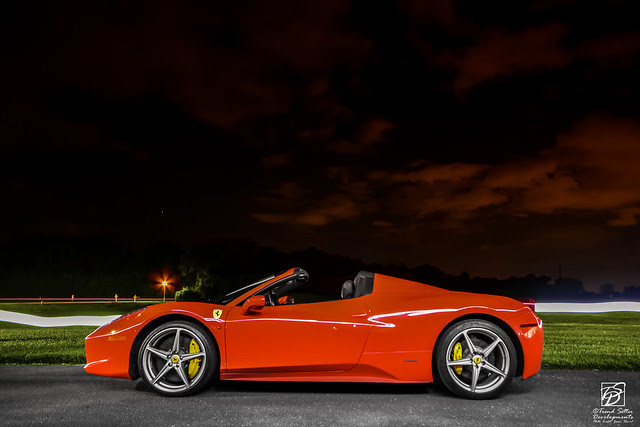 To achieve these type of shots  I had the light extended all the way up on the monopod, splashing light on each panel from a 45 degree downward angle. One of us would simply open the camera shutters and the other start the motions around the car. In the shot above I took some time walking behind the camera lighting the side of the car and then ran behind it to create the streak.

Depending on how much sky and background we wanted we would vary the shutter speed around 8 to 30 seconds or more. A shorter shutter speed meant only the car was really visible (as in the first shot at the top of this page "Awakened") , a longer shutter time let clouds (illuminated by a nearby town) creep into the photo as seen above. 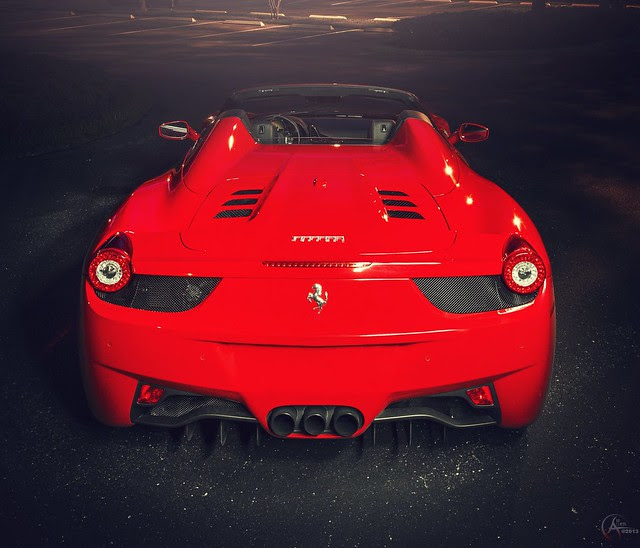 In the shot of the back of the Ferrari I lit the car primarily from the right side. From a distance of about 3 feet above I simply turned the light on the pole with my wrist to eliminate heavy streaks (seen only in the right side bumper), this effect gave a more balanced look.

In the dash shot below I rigged the camera in place with a Magic Arm to a tripod and then Jason and I passed the LED on a monopod across the back of the 458 to highlight the interior. 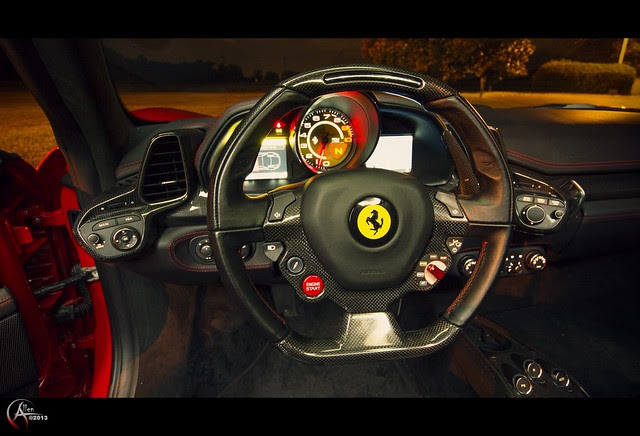 And then of course as we figured more out ways to bend light, things got dramatic, this was way too much fun. The shot below was a merged image of several passes from back to front of the light pole flying overhead.  In many of the shots the light streak reflections crossed the hood but by using Eric Curry's technique I masked out all passes in post except the lower passes across the left/right sides. 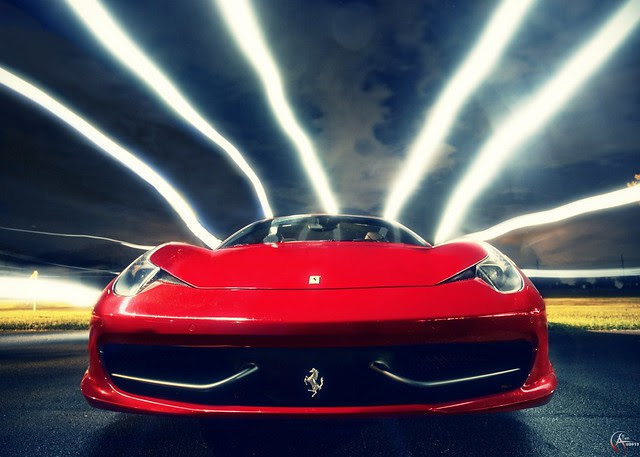 Several hours later between dying batteries, a never ending supply of Mosquito's who chewed us to bits and a bit of drizzle from the clouds above, we both felt it was time to call it. Overall the experience was every bit as amazing as Eric's book said it would be. For both Jason and I the shoot left us inspired and a feeling of a greater potential for creativity in the months ahead. 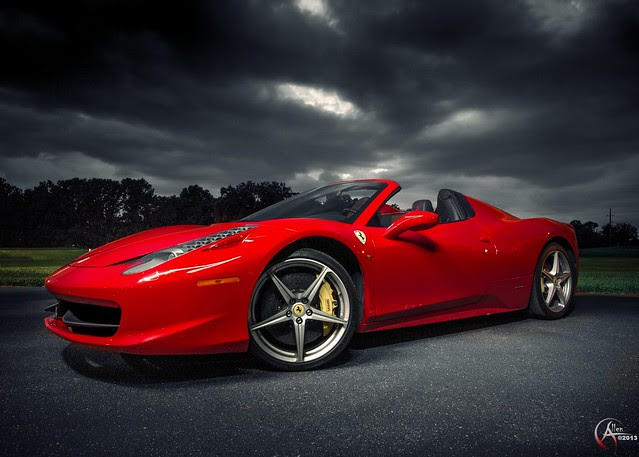 Aside from the cool car and bright lights side to this story I must restate the importance of learning and working with fellow photographers. Even if you think you know how something works, there is room to grow by both learning and teaching; in the end, the results are not only instantly gratifying but often leave you walking away from the project a more diverse artist than when you arrived. 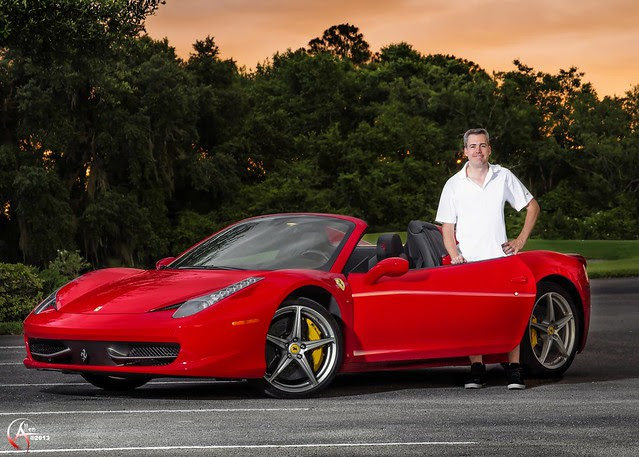