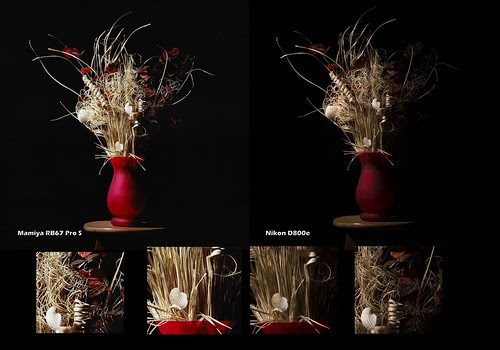 Mamiya VS Nikon, a photo by Savage Land Pictures on Flickr.
I was very interested in the Nikon D800e since many people have compared it's resolution to medium format. In this test the Nikon did very well in dynamic range vs my Mamiya RB 67 Pro S 220 film camera; this is a notable feat as dynamic range is really one of the things loved about medium format.

However in sharpness the Mamiya was tack sharp vs a softer edge by the Nikon. I would assume this has more to do with the Nikon lens than the sensor, I was using a Nikon AF-S VR 70-200mm f/2.8G vs the Mamiya 180mm. The Mamiya however has no auto-focus ability's.

As with my previous post on light here is a close up of the gun from the game "Portal" as seen by three cameras. The most notable thing here is how the film on the RB67 pulled out the reds in the reflection of the chair onto the body, this was not obvious in either DSLR even through the light levels were the same. Also note the tack sharp "Aperture Science" logo on the body and the defined lines on the black mechanical arm in the RB67 shot.