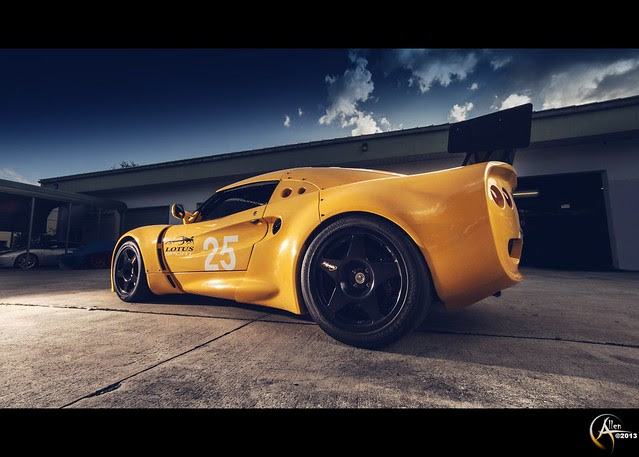 I have long been a Lotus fan, I think it started with that great video of a Lotus Esprit V8 racing through the hills as featured on the Need for Speed 2 video game back in 97. Around that same time Lotus created the series one Elise. I remember reading about the Elise in Road & Track and getting quite jealous that it was only available in Europe at the time. I remember a critic in a magazine saying something like "Choosing to race against an Elise is like picking a fight with Bruce Lee" The Elise seemed to be the definitive Lotus car being that Lotus has never been about brute horsepower but rather a harmonious balance of wonderful agility and power to weight ratios, that the Elise is and has been immensely successful because of it. 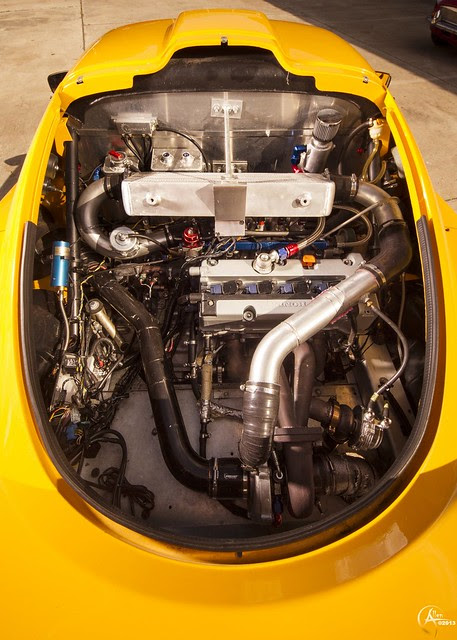 A few series one Elise cars did come to US shores many years later but only as "Motorsport" track editions. Many US bound Elise track cars had Honda motors swapped in, not the Toyota engines common in the last generation of the Elise or the Rover K1800 engines used in the UK. I remember seeing ads for company's offering this service in the early 2000's (many of these shops are are still around). The common Rover for Honda swap was the K20 (the immensely popular Acura Integra Engine).

The K24 engine used in this Elise was most notably used in the Acura TSX.  One reason the K24 was choice was because the TSX transmission that went with it had the ability to do six speed sequential shifting (Honda's Sequential Sport Shift). This version of the Elise has a costume sequential shifter housed in a carbon fiber shroud.

To make things even more exciting this K24 Elise is turbocharged giving this track attack monster nearly 320 HP (Up from 190HP); Considering the series one Elise's weight is sub 1500 pounds, this is one amazing setup. 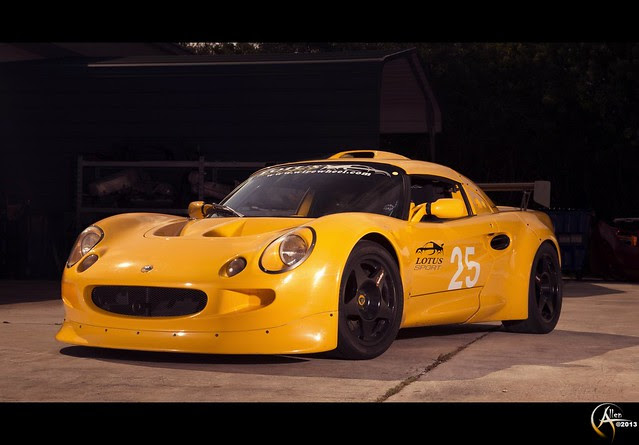 This stunning Motorsports Elise is currently owned by Wirewheel.com who invited me down to spend some time with this lightweight Supercar. It's one of only 64 Elise Motorsport cars built by Lotus directly. The K24 Motorsport Elise just screams "Take me to the track!" and one sit inside you will feel the urge to take on any car. 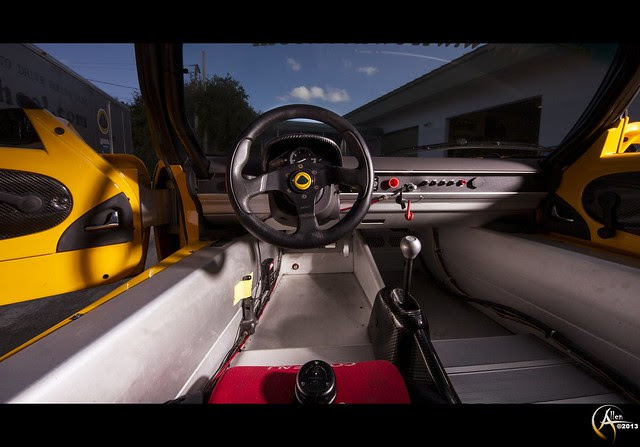 The interior is as sparse as a Ferrari F40, minimalist control's and a fit like a glove. The Corbeau seats snuggle your shoulders in for those tight corners and the harness keeps you in place when the G's start hitting. 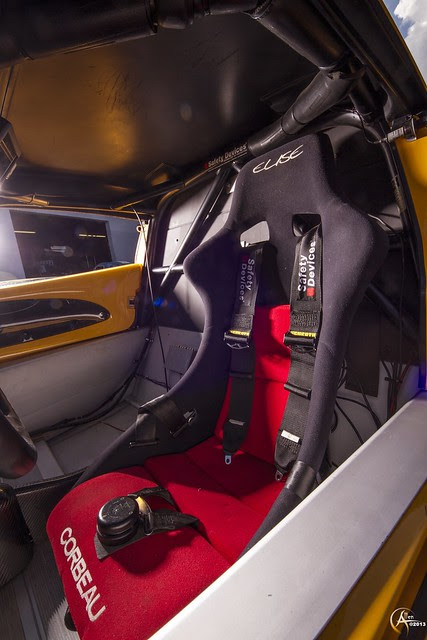 The back deck of this Elise is certainly a prelude to the Exige that would be developed years later.I really thought the louvered shell stood out as a prominent feature, along with the functional roof scoop it really reminded me of the Tommy Kira ZZ II a very unique Japanese tuner car. 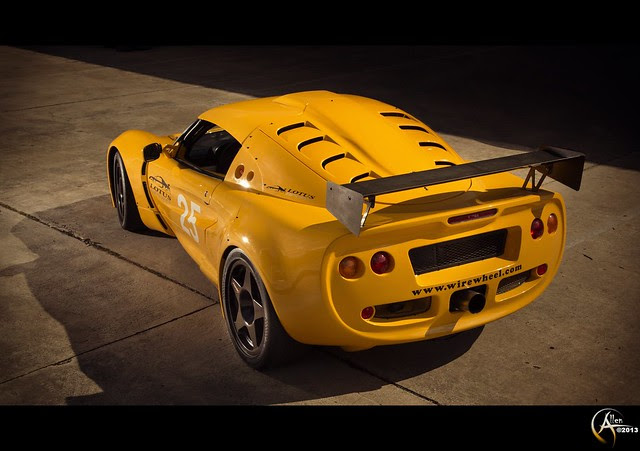 The stance, aerodynamic panels and embossed back end give this Elise a serious appearance as does the simple but seriously cool Lotus 5 star lightweight race rims. The rear wing is a fully adjustable all carbon fiber design. 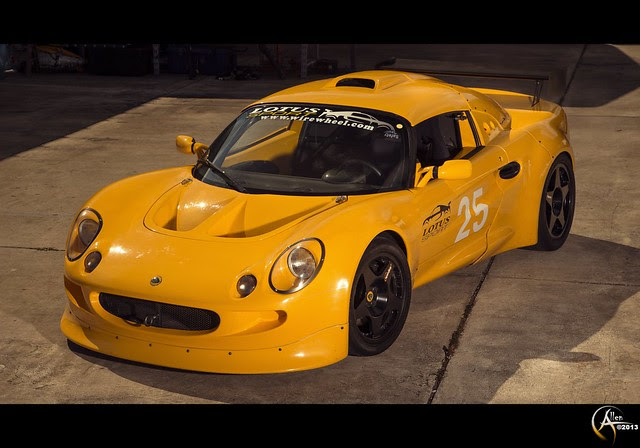 Like a miniature version of the Lotus GT1 the extended front fenders add some dramatic lines to the front half of the Elise as well. 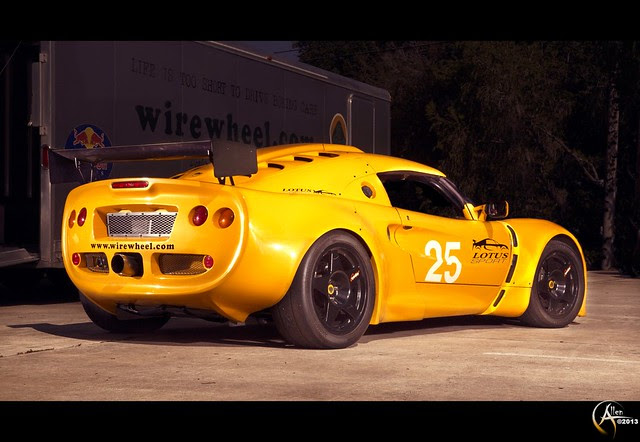 In all honestly this little powerhouse had everything going for it; agility, great looks, great power to weight and perhaps the most interesting part of this story - for those looking to take a Supercar to the track , Wirewheel has it up for sale for less than the price of a Porsche Boxster.... needless to say I would be happy to start a "Jess needs a Supercar fund" for the keys to this beast.

Special thanks to the folks at Wirewheel for the chance to spend some time with this awesome Elise.