2013 was a fantastic year for photography, so many diverse projects and wonderful opportunities for me.
I had a lot of fun working with medium format film seriously for the first time as well learning a whole lot more about creative lighting.

Here are my absolute favorite images from the year and a little back-story for each. 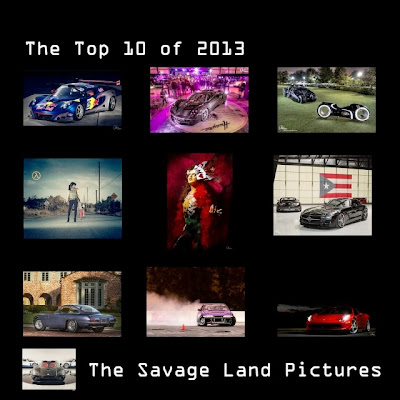 Number: 1
Name: "Vegas Baby"
Why: The pure artistry of it
The Story:  The short version: body-paint artist Kyle Vest, model Christie Matheis and I came up with a very unique vision, an avatar of Las Vegas. Shot in only 12ft of space using only auxiliary lights as the main strobe was out of commission, we created something quite unique and very artistic.

I have a large canvas version of "Vegas Baby" in my office and it looks just like a painting, it's very inspirational.

Number: 2
Name: Black tie affair
Why: The exclusivity of it
The story: Two AMG SLS's in a private airport hanger, how can that not lead to a great story and great photos?

This particular shot was done through a door frame as I set up a second half-day of shooting the SLS coupe and roadster with the exclusive (and at the time not publicly seen) MEC Design tuner packages.

This is one of the first large scale automotive shoots that I incorporated the use of medium format film and the results were stunning. The IMAX sized frame captured a heavenly depth of field effects and wonderful dynamic range.

The full behind the scenes story can be found here: http://www.savagelandpictures.com/2013/02/the-mec-design-automotive-photoshoot.html


Number: 3
Name: Pagani Huayra
Why: Reversing the rules
The Story: While shooting the Orlando Festival of Speed I opted to put my Canon 6D up on a platform above an admiring crowd. The center of attention was the $1.7 Million Pagani Huayra.

Typically when I compose shots I try to create a focal point using depth, light and or color. In most cases I make the subject the most colorful element in the shot but in this case the subject was black with wonderful colors all around; I decided to go with the flow and reduced the saturation of the automobile to immerse it in a circle of color.

The shot was pulled off using the remote WiFi shooting ability of the Canon 6D, the single feature that has completely won me over to this camera.  I remember looking at my cell phone as the photo popped up and the person next to me saying "Oh my gosh did you just shoot that with your cell phone?!" my response "Well sort of."

Number: 4
Name: Red Bull GT3 - shot 6
Why: Taking complete control of mid-day sun.
The Story: Of course this Lotus with an amazing history of being designed and raced by Adrien Newey is enough (full story on that here http://www.savagelandpictures.com/2013/11/the-red-bull-racing-exige-gt3.html) however on the technical side - this shot (and the series with it) took a lot of ideas I have had about light-painting and strobe photography and mashed them together.

Early in the year I had read Eric Curry's book "Painting with Light: Lighting & Photoshop Techniques for Photographers" that really opened my mind to painting specific details with light one shot at a time and layering them together. This shot was done with a 900 watt powered strobe allowing me to achieve very controlled light under what normally would have been considered harsh mid-day sunlight.  Using a small dolly with the lighting rig, I was able to rotate around the car getting all the details I would need. After a little masking and layering in post the shot that I was ultimately after came to life.


Number: 5
Name: A dramatic entrance
Why: The inspiration
The Story:  There is this photo by Larry Chen of drift champ Mad Mike that I saw this while working some heavy hours in the video game business. I swore that when I got a free weekend that I was going to find a way to try to get a shot that captured that kind of intensity. Considering that Larry Chen is perhaps one of the absolute best automotive photographers in the business this was going to be no small challenge.

W-Drift America had made a stop in Orlando during the month of May. I found a way to make a window in my schedule to shoot the event.  I shot all afternoon getting pretty good shots from different positions along the race wall but none that grabbed me the way Larry's photo had; suddenly an unknown driver blasted past the grandstands in a Nissan Silvia, I saw the moment I was after and took the shot. The single frame captured all that I was after, looking close you can see the intensity of the drivers concentration, the heat of the tires as they melted away below the car and the beautiful blur of the trees that sold the speed factor; together it was all that I was after.

I still think Larry's photo is a work of art but I am grateful for the inspiration.

Number: 6
Name: Lair of the Supercars
Why: A great shot under pressure.
The Story: Considering the the caliber of automobiles in this shot it is an obvious choice. With over $3 million dollars in front of the lens it was a dream opportunity, however the challenge was to light the room and shoot this on medium format film in 15 minutes. Needless to say I am grateful for having all my equipment in order for a fast set up, I was able to shoot this and a few other shots from this extraordinary collection and walk away with some truly impressive images.

Number: 7
Name: 1965 Lamborghini 350 GT Back
Why: The perception of another era
The Story:  Shot at 6:30 am in the morning outside a historic home in central Florida for RM Auctions, the elegant lines of the Lamborghini 350GT and the beautiful architecture behind it transports the viewer back a half century to a quaint village in Italy. The soft morning light was accented by a high powered strobe through a massive beauty dish to bring out all the subtle details in the automobile, most notably the wire wheels.

Number: 8
Name: Awakened
Why: Collaborative work
The Story:  Flickr photographer Jason Sha'ul and I worked together on this series Ferrari 458 of photos. The entire project was based in experiments in light painting. Shot on a golf course in the middle of the night, Jason and I used a set of inexpensive video lights attached to monopods to light up the night.  We both set up our cameras in different spaces and made the light-paint dash after the camera timers were set. Having two people light paint in tandem can really make shots exciting.  I know most photographers are super secretive about their work and techniques but let photos like these exist to say, working with other photographers can yield amazing shots and honestly even with us both in the same environment our shots came out pretty different as no two people see or photograph the world the same way.

Number: 9
Name:  Alyx Vance, Half Life 3
Why: Bringing the virtual world to life
The Story: Many photographers who have a significant other get asked to do photoshoots of them for Facebook or the like. I have done several for my better half here but this time out I wanted to try something a little different.

Most know that I also work in the video game industry and in doing so am a huge video game fan. Half-Life 2 was one of my top 5 favorite games and anyone who has played it knows both Alyx Vance and the Gravity Gun are synonymous with the game.  It took me a month to build the Gravity Gun from scratch including all the wiring for it. Alyx's clothing was picked out based on some concept art I had seen for Half-Life 3.  I finally had the ingredients for a cool Cosplay shoot but I opted to take it a notch higher by shooting the series on 220 medium format film in an industrial park, I really thought this shot fit the nature of the Half-life series...a lot of work but well worth it.


Number: 10
Name:  The Tron Lightcycle and The Batman Tumbler
Why: Oh come on, Batman and Tron together at last!
The Story:  While shooting the grounds of the Festival of Speed before the main event I heard the Tumbler roll in. When I looked over the hill and saw it there I was in near disbelief, so much so that I abandoned the shot I was attempting on a Lamborghini. As I waited for another photographer to finish his set, the Tron Lightcycle shows up. My friend Jason and I plotted out what would be a great set of shots and when the opportunity presented itself we captured this still with a tandem light-paint.  It is a great scene of two very iconic vehicles. As the shot popped up on my lcd screen the owners were in awe.

So what are my intentions for 2014? Well to be honest I really hope to move on artistically to shots that tell a story. I have been very interested in the work of Gregory Crewdson as his images are visually stunning and have so much depth. I am looking deeply into the concept of telling stories about the human/automotive relationship...staying true to what I am passionate about but venturing off into something that is more emotionally dramatic.

Wish me luck and as always thanks for reading. Have a great new year.