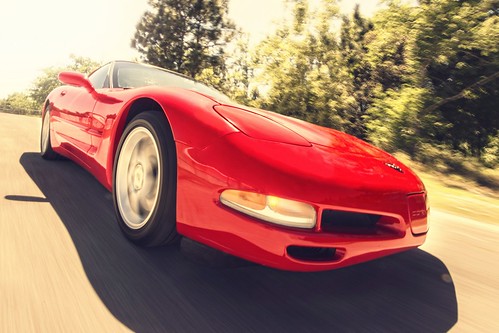 My Corvette rig shot was featured on Flickr Explore two days ago at #356 in the top 500.
I was very happy about that being it was the first time I had attempted a full rig shot in the traditional sense with the whole cross bar and suction cup bracket mounting. Here is a behind the scenes picture of the setup: 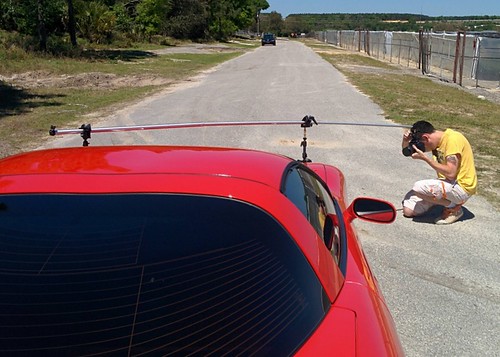 I had two assistants: Ryan See and Jacques Rossouw who helped with the setup. In the photo above we had the bar mounted and I was simply framing up the shot before entering the car to drive it.  I was using a 14mm zoom on a Sigma 8-16.

To actually take the photo my assistant Ryan sat in the passenger seat while I drove the Corvette at around 5 MPH. Jacques ran along side of the car in case something went astray with the setup.

The Canon 6D has a remote shooting ability via Wi-fi Canon app so Ryan could see what the camera was viewing on my smartphone and activate the shutter. I would then stop the car and tweak the settings via the cell phone and do another run.  The final settings were about 1/10th of a second at around F25 due to the bright sun, but this still gave a nice effect of speed. The Sigma is a dome shaped lens so a ND filter was not possible to attach.

Supplies needed for such a shot:

Crossbar $50
http://www.bhphotovideo.com/c/product/996911-REG/impact_bg_acb_9_background_adjacent_crossbar.html
(If you have a heavier camera like a Nikon D800 you might consider a more heavy duty cross bar, I would suggest aluminum piping at Home Depot or the like) or perhaps a speaker mounting pole like:
http://www.bhphotovideo.com/c/product/277984-REG/Mackie_SPM100_SPM100_Speaker_Mounting.html

And of course the camera and lens of your choice.

In post the rig was removed via cloning and the color was adjusted to be dramatic.

Tip: To make the rig removal easier in post, on location before you take the camera off the rig set up a tripod and match the cameras height and perspective. Remove the rig from the car. Place the camera on the preset tripod position and take a shot of the car. You can now easily mask out the rig items that were attached to the car instead of endless cloning.

A super cool project that resulted in a very cool shot.