I know, I know, I have been been on a bit of a hiatus. This past few months aside from my work on my 49th video game project, I have been learning a bunch about GoPro's 3D Dual Hero camera system. 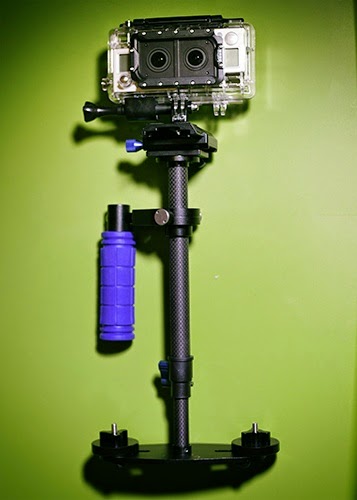 The Dual Hero system consists of two Black Hero 3+'s and the 3D housing that includes the dual camera sync cable. The system is extremely easy to use as the operator simply sets all functions on the right GoPro and the left GoPro will automatically configure to whatever setting was assigned.  The whole system operates in what looks like a oversized waterproof GoPro Case.

Stabilization can be achieved with a small Steadicam like device. The Stabilizer pictured is from Cowboy Studios and works pretty well after balanced but as I discovered it takes some time to get it set up right the first time. I found a good video on the balancing process for a stabilizer like this here. A couple of notes specific to the 3D GoPro users...turn the weight stack sideways as pictured above and avoid dropping the weight stack all the way down as it will cause what I call the "walking wobble" effect. The weight stack should only have one weight per side and should be raised up actually a bit higher than what is pictured; the goal is to be able to hold the blue handle, tilt the camera on it's side and when you release it have it rotate back to center in about 1.5 to 2 seconds. If the camera swings fast or radically overshoots the center it's "bottom heavy" and thus you will get the "walking wobble".

My first few projects actually suffered from the "Walking Wobble" as I was touring historic forts in the Panhandle area but I was able to stabilize the footage better in post production, I'll get into that in just a moment but your welcome to check out the videos.

In these videos I learned a bunch about the 3D process. One of the big first hurdles is the need to understand convergence, GoPro provides free 3d software for this and it really performs well.
Go Pro has published a great video about the process here:

Other notes about the GoPro editing software. It will convert the files from the left/right camera into a dual stream AVI file. This is super cool because if you should mess up the convergence file you can go back and reset it in the GoPro software even if you only have the merged AVI file! This can also be tweaked in video editors such as Vegas or even live while open in such software.

For me I have been editing in Sony Vegas for years and have been very pleased with some of the features for 3d. However if you are just getting started there are some easy pit falls to fall into.
The first major issue I had was a ghosting type effect or jittery image during rendering. This issue at first seemed as if it was some sort of interlacing or FPS issue but it actually was the result of a motion re-sample setting. If you right click on a clip in Vegas under clip properties you will see this box: 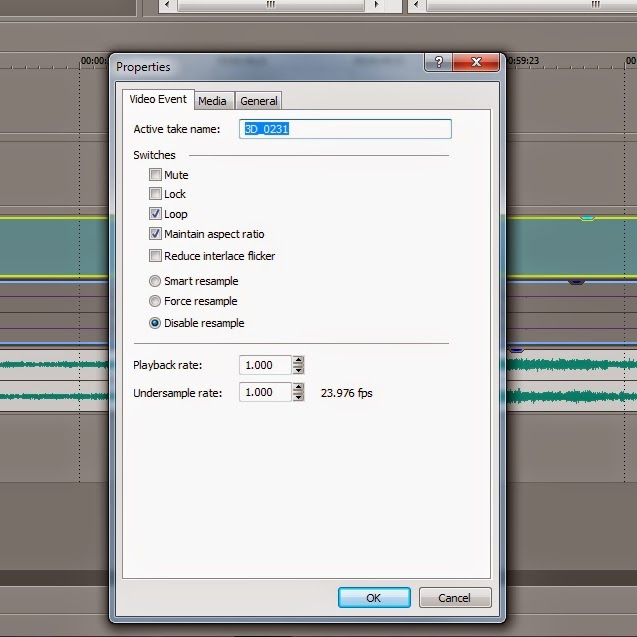 If you select "Disable Re-sample" your jitter/shadow issues will be resolved at render (and in preview as well), it will do this for both 3D streams in the AVI file at the same time.

The next issue I had was addressing the "walking wobble" issues I had on my first day out with the gear. Sony Vegas actually does this pretty well with a "Media Effect" called "Sony Stabilize 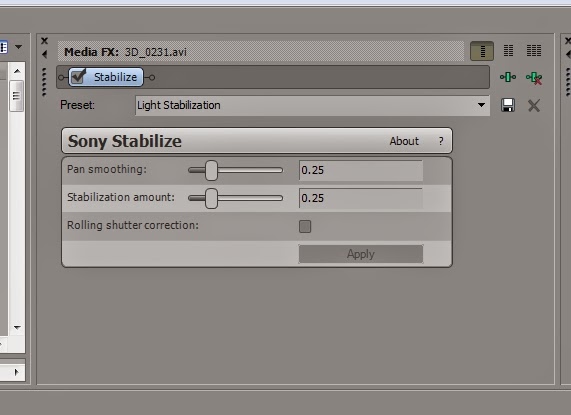 To get this to work you need to add this plug-in under "Media FX" per video clip. You then need to adjust the sliders as desired and then hit "Apply". I found that the "Pan Smoothing" works well for the wobbles but to be conservative with the Stabilization amount slider as the sharpness of the image will take a hit or you will get blurry spots here and there.  Also another common complaint about this plug-in is that occasionally it will crash Vegas after it's done with the analysis pass. I found this issue would go away if I simply created a subclip and ran the process again.

Creating 3D text effects can easily be done in Vegas as well using the stereoscopic 3D adjust plug in: 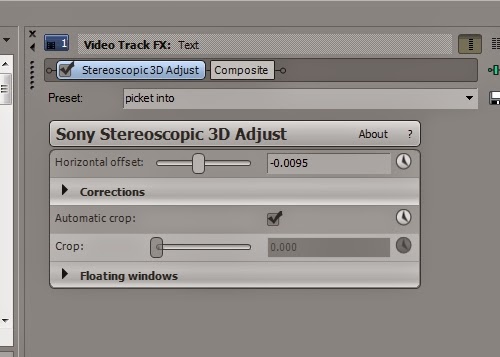 The settings you see here will give you a nice 3D separation for text.

The final step of course is rendering and for that I used the following custom settings: 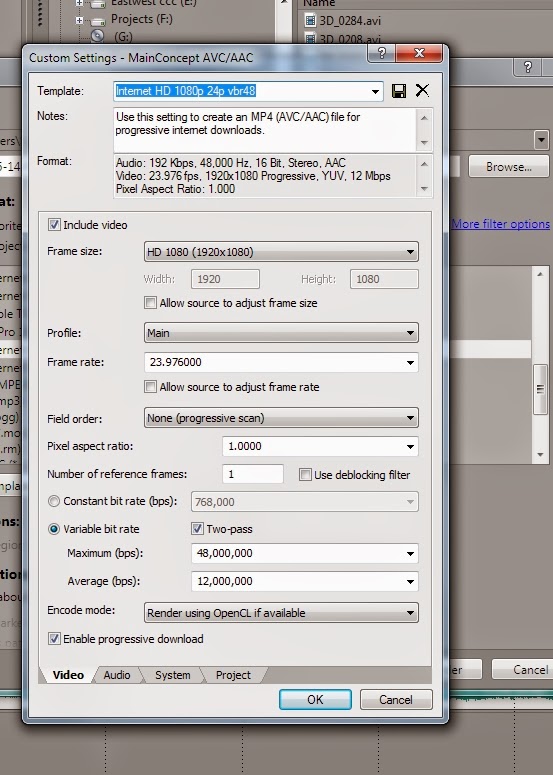 The two pass option will really optimize your render, it comes out looking like the original GoPro capture footage.

Sadly, after I had shot the Forts I figured out the physical cure for the "Walking wobble" but was unable to return to reshoot...ah well, live and learn. I did shoot some other locations including footage of the SR-71 blackbird with the camera stabilizer balanced and working significantly better.

Well I hope this information helps a fellow 3D movie makers out there as it's a great format that offers a completely different experience than traditional 2D viewing formats.

On a completely different subject the soundtracks for the videos were original compositions. I have posted them here with some detail about the scores:.

Thanks for reading!
Cheers,
Jesse