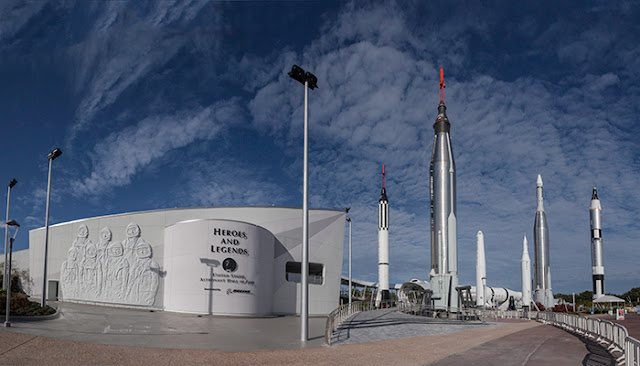 In the summer of 2016, I surprised many of my industry peers when I left the video game industry after a 52 game run and announced that I was venturing into interactive theme park media creation as a member of Falcon's Creative Group. A huge reason for the career shift was the chance to work on the "Heroes and Legends" project at the Kennedy Space Center. As a lifelong space enthusiast, this was the quintessential dream job.


Like many space enthusiasts, I thought I knew quite a bit about America's historic leaps into space but after spending months researching missions, editing through hours of NASA footage, and interviewing many astronauts, I quickly discovered I knew very little. This aspect actually made the "Heroes and Legends" project even more exciting as I knew the historic stories we would tell would offer the public a fresh perspective.

From the media perspective, this meant our "Falcon's Digital Media" team would be creating 36 short "space artifact" documentaries for the pods, a massive interactive DB of photos and historic film clips for the "Astronaut Hall of Fame", as well as a beautiful large format 3D film called "Through the Eyes of a Hero". Collectively these experiences give the public a chance to not only ride along on some of the greatest missions in early spaceflight but also learn so much more than the history books tell you.

Since this was such an inspiring project for me, I couldn't help but want to capture some behind the scenes action. Often on my early morning trips down to the space center, I brought along cameras to capture the creation of this interactive museum. Soon after "Heroes and Legends" had it's opening weekend I shot a few interviews with our talented Falcon's Creative staff and spent an off weekend to cut together a rough draft of "The Making of Heroes and Legends" as a gift to my production team during the 2016 IAAPA trade show; Complete with an all original music score from one of my better-known peers in the video game industry, Penka Kouneva, who scored the attraction as well. The photo above is Penka and I during opening weekend with the original score from the film "Through the Eyes of a Hero" shown inside "Heroes and Legends"


After the IAAPA trade show our production team gave this documentary project the green light allowing for an even more in-depth story to be made about our journey to build this very special place. I could not be more proud to showcase the talents of many of my peers at Falcon's Creative Group as well as to play a part in telling America's inspiring space story to the next generation.


Here is the link to our amazing story: